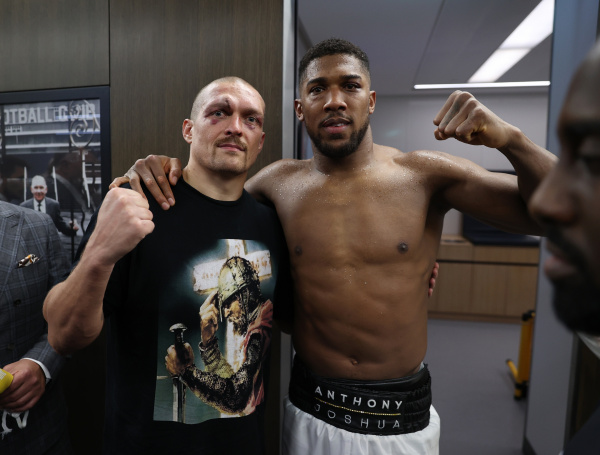 ANTHONY JOSHUA and Oleksandr Usyk could see their rematch pushed back to July.

The heavyweights looked set to complete their return tie in June after Usyk left war-torn Ukraine to begin his training camp.

But according to Dan Rafael, promoters Eddie Hearn and Alexander Krassyuk are now targeting a July 12 date.

Initially, June 25 had been discussed but Usyk has only just started his preparations for the contracted rematch.

Saudi Arabia is also named as a potential host despite heats of up to 43C in July, their hottest month in the year.

After Joshua, 32, was stunned by Andy Ruiz Jr, also 32, in June 2019 their rematch six months later was taken to Saudi Arabia.

And AJ regained his heavyweight titles in the outdoor Diriyah Arena in winter temperatures of around 27C.

But when Joshua was in talks to fight Tyson Fury, 33, last summer, plans to build a brand new indoor venue was proposed.

The same could be expected if AJ and Usyk are to add another chapter to their rivalry with a Saudi sequel.

Joshua lost the WBA, IBF and WBO belts for a second time last September after falling victim to a 12-round masterclass in London.

But his shot at redemption looked to be under threat after Usyk bravely took up arms to defend Ukraine amid Russia’s invasion.

AJ contemplated an interim bout in the meantime as Usyk fought a far bigger battle than anything possible in the boxing ring.

But the sensational southpaw then announced his intentions to fight Joshua once more and left his homeland to do so.

Only now has Usyk confirmed his training camp has started, while Joshua has been in the gym since the start of the new year.

Anthony Joshua’s fight against Oleksandr Usyk set to be pushed back a MONTH after Ukrainian starts training camp (thesun.co.uk)