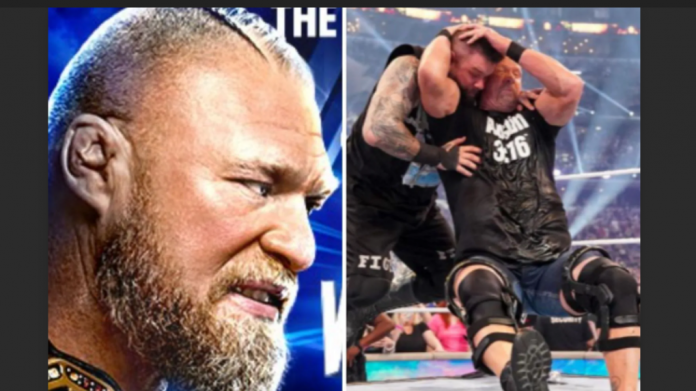 WRESTLEMANIA 38 has truly gone down in history as one to remember after two stunning nights at the AT&T Stadium in Dallas, Texas.

Stone Cold Steve Austin made another appearance as he took out both Austin Theory and his longtime nemesis the WWE Chairman Mr McMahon.

Jackass star Johnny Knoxville defeated Sami Zayn in an Anything Goes Match, while Edge beat AJ Styles with the help of an unexpected interference.

The duo lost their belts in a fatal four-way to Naomi and Sasha Banks on Sunday, and the fallout continued on to last night’s edition of Raw.

The former champs were due to face Natalya and Shayna Baszler, but before their opponents could be introduced, Queen Zelina grabbed the mic and blamed her partner for the defeat in Arlington.

Zelina accused Carmella of being more occupied with her own looks than wrestling, and when she followed up by questioning her engagement to Corey Graves, the pair came to blows.

AJ Styles took a nasty whack to the head on his way to the ring at Wrestlemania.

The 44-year-old, real name Allen Neal Jones, was seen bleeding from his right cheek as he walked out for his matchup with Edge at Wrestlemania 38.

Initial reports suggested the damage had been done by stray pyrotechnics during Styles’ dramatic entrance.

But FOXSports WWE expert Ryan Satin later claimed Styles smacked his head on the set just seconds before walking out at the AT&T Stadium in Texas.

One wrote: “Feeling like a kid again and I love it 😂”

While another commented: “Haha thats the way I felt too. I was hyped up after that lol.”

A third added: “This might be the greatest mania match ever.”

WWE shared the first picture of Undisputed Champion Roman Reigns after his victory over Brock Lesnar at WrestleMania 38.

The Tribal Chief picked up a controversial victory over Lesnar with a thunderous Spear.