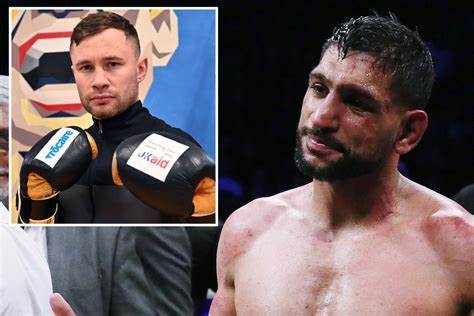 CARL FRAMPTON has called on Amir Khan’s family to talk him out of a boxing return.

But the 2004 Olympic hero considered exercising his rematch clause and even taking an interim bout before a second fight with Brook.

Former two-weight world champion Frampton, 35, retired last year after a loss to Jamel Herring, 36, and urged Khan to do the same.

He told Belfast Telegraph: “It has been an incredible career, but he is considering fighting on and to me, it just seems like greed almost as he must have plenty in the bank.

“After the performance he produced against Kell Brook and to want to fight him again, I think his family and those closest to him need to sit him down and tell him to wise up.

“I’ve mentioned before the old line from Joe Bugner who said: ‘What’s the point in having money if you can’t count it.’”

Promoter Ben Shalom, whose Boxxer banner is partnered with Sky, was the man to get Khan and Brook, both 35, to agree terms.

And even he has warned Khan against a rematch but admitted the Brit icon is free to do as he pleases.

Shalom mentioned Florian Marku, 29, as a potential comeback opponent in the welterweight contender’s homeland of Albania.

He said to iFL TV: “We’re going to do a big event with him in Albania, we promised him that. He wants to do his homecoming.

‘It seems like greed’ – Carl Frampton urges Amir Khan’s family to talk Brit out of return as he is offered Albania fight (thesun.co.uk)