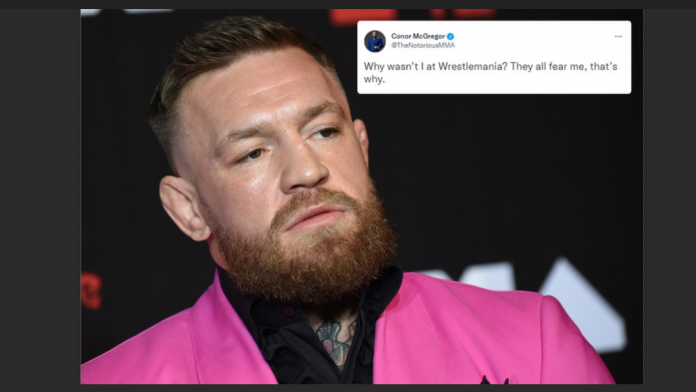 CONOR McGREGOR says he wasn’t at WrestleMania because “they all fear me”.

And the former UFC champ has quickly been called out and slammed by a whole host of wrestling stars.

McGregor got fans all excited last year when he hinted at an WrestleMania 37 appearance to fight countryman Finn Balor.

Things snowballed even further when WWE legend and part-owner Triple H threw open the WWE doors to McGregor by responding: “Just say when.”

But the Irishman did NOT make an appearance at that show, and was missing at this year’s WrestleMania 38 blockbuster too.

McGregor posted his reasoning on Twitter in the early hours – maybe after he watched the show.

He wrote: “Why wasn’t I at WrestleMania? They all fear me, that’s why.”

However, this did not go down well with a whole host of wrestling stars.

Drew McIntyre responded with “shut up McTapper” – in reference to McGregor submitting in his grudge match against Khabib Nurmagomedov in 2018.

Sonya Deville commented: “Because I’m the f***ing boss. 😉 call me.”

Dolph Ziggler teased the MMA star that he “can’t cut down to flyweight”, while Sheamus simply posted an emoji of a pair of scissors.

But Becky Lynch, who hails from Ireland like McGregor, seemingly wants her countryman on her side next year.

She posted: “Hey man. I could have used you. Bianca brought an army. Next year?”

Lynch lost her Raw Women’s Championship to Bianca Belair at the AT & T Stadium in Texas.

McGregor, meanwhile, is planning on returning to the UFC following the horror injury sustained in his trilogy defeat to Dustin Poirier in July last year.

The Notorious suffered a double-leg fracture and has been building up his fitness following successful surgery.

WrestleMania 38 will go down in history as one to remember after two impressive nights at the AT&T Stadium in Dallas, Texas.

Stone Cold Steve Austin made another appearance as he took out both Austin Theory and his longtime nemesis the WWE Chairman Mr McMahon.

On the opening night Austin came back after 19 years of retirement to beat Kevin Owens in a no holds barred match.

Conor McGregor taunts WWE stars as he reveals why he wasn’t at WrestleMania 38 to annoyance of wrestlers (thesun.co.uk)