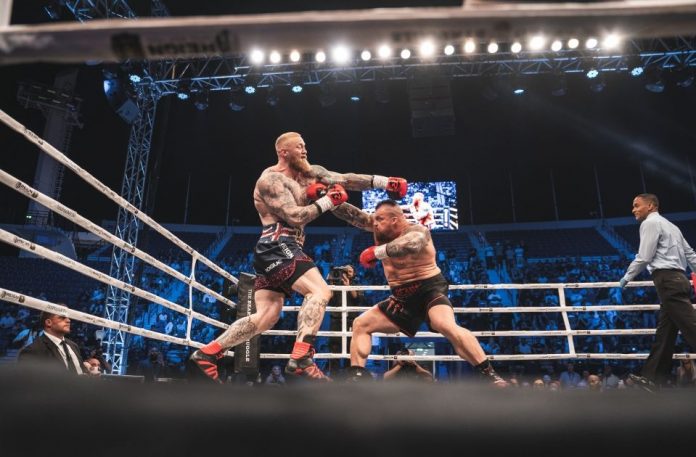 EDDIE HALL has confirmed he’ll get Hafthor Bjornsson’s name tattooed on him – but only if he gets a second crack at the Game of Thrones star.

The 2017 World’s Strongest Man lost his Dubai dust-up with Thor – in which he was dropped twice – earlier this month via unanimous decision.

Hall verbally agreed to have the Icelandic giant’s name inked on his skin if he lost the fight and plans to get the tatt to secure a rematch.

He said: “We never had anything formal in writing; I did try to, I reached out to the promoter a couple of times trying to get a zoom call with Thor but it never came to that.

“There is no stipulation as to how big, the colour or where, other than what was said on YouTube.

“I guess it’s going to be used as a tool for the rematch and I would do the same.

“I wouldn’t do the rematch if Thor didn’t get he tattoo.

“It will happen, I will do it in my own time.

“I will get the rematch clause written up before I do and that might take some time, but I’m a man of my word and if it’s going to happen, it will happen.

“I can see the funny side of things at the end of the day. the loss is a tough thing to take but it is what it is.”

Hall was left disappointed by the judges’ decision to award Bjornsson the victory in their grudge match.

And Bjornsson, 33, is willing to give his former pal a shot at redemption.

He said: “Understandably, he seemed a bit angry still. He lost the fight so it’s understandable as well.

“But I’m happy, if he wants the rematch I’ll take a rematch no problem. Would you guys like to see a rematch?”

The former basketball player added: “On my behalf, I’ve moved on. If he wants a rematch, I’m fine with it.”

Eddie Hall CONFIRMS he will get tattoo of Thor Bjornsson on his body in bid to secure rematch after first fight loss (thesun.co.uk)