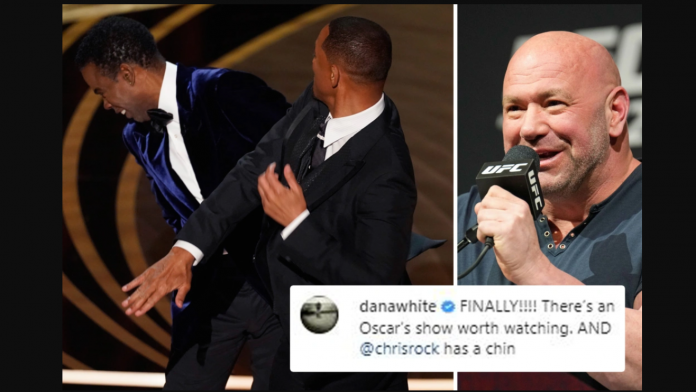 ‘Chris Rock has a chin!’ – UFC boss Dana White reacts after Will Smith’s brutal Oscars slap after joke about wife

DANA WHITE said Chris Rock ‘has a chin’ following Will Smith’s shock slap at the Oscars.

It came after the comic made a joke about Smith’s wife Jada on stage, sparking a furious reaction.

The Hollywood star proceeded to smack Rock – leaving those in attendance stunned.

Others found it amusing, including UFC president White, who tweeted: “FINALLY!!!!! there’s an #Oscars show worth watching.

“AND @chrisrock has a chin.”

YouTuber-turned prizefighter Jake Paul, 25, added: “Someone get me on the phone with Will Smiths boxing representative asap.”

The altercation followed after Rock said: “Jada, I love you, G. I. Jane 2, can’t wait to see it.”

Jada, 50, on the contrary, has been struggling with hair loss for years due to her alopecia diagnosis, and last year decided to shave it all off.

Smith, 53, then stormed the stage and hit presenter Rock, 57, before shouting: “Leave my wife’s name out of your f***ing mouth.”

Later, the Fresh Prince of Bel-Air alum won Best Actor for his role as Richard Williams in King Richard.

Smith tearfully apologised to the Academy during his speech – but not to Rock.

“This is a beautiful moment, and I’m not crying for winning an award.”