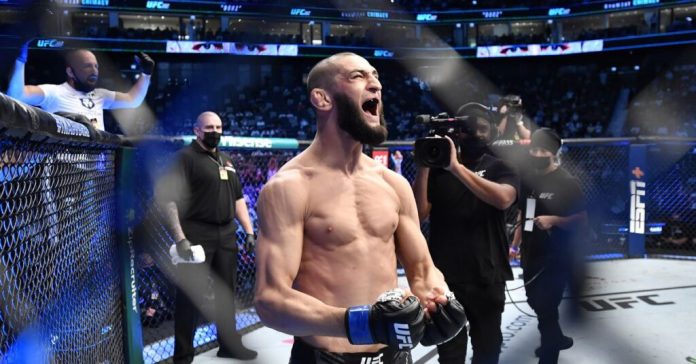 Kamaru Usman is one of the most dominant champions on the entire UFC roster, and it’s going to take a lot for somebody to finally knock the crown from off his head.

All signs are currently pointing towards Leon Edwards getting the next shot at Usman later this year as he seeks to become champion and avenge the last loss he suffered in the octagon back in 2015.

While Edwards is confident he can get the job done, UFC color commentator and retired lightweight contender Paul Felder believes it’s going to take a very special kind of performance to actually take that title away from Usman.

“I really, really like Leon Edwards and I think he deserves this title shot more than anybody,” Felder said on The Fighter vs The Writer. “But I think that’s a win for Kamaru again.

Felder looks at two of his longtime teammates as legitimate threats to Usman: Belal Muhammad, who is currently riding a seven-fight unbeaten strike, and undefeated welterweight Sean Brady, who sports a 5-0 record in the UFC with a win over Michael Chiesa in his most recent outing.

Both Muhammad and Brady come from grappling backgrounds, which is what Felder feels an opponent is going to need to really challenge Usman.

“Those two guys to me are, after what Belal showed in his last performance with [Stephen] ‘Wonderboy’ [Thompson] and what Sean has shown throughout his career, I think it’s one of those two guys in the future [fighting for the title],” Felder said.

“I don’t think it’s yet. I think Leon is the next guy and should be the next guy. But as far as somebody that’s really going to challenge [Usman] in the future, I think it’s one of them.”

Of course, the one contender not mentioned yet is Chechen wrecking ball Khamzat Chimaev, who is also perfect with four wins thus far in his UFC career.

Chimaev is currently scheduled to clash with Gilbert Burns in a featured bout at UFC 273 on April 9, and that will be his biggest test to date by a rather wide margin.

Felder recognizes the talent that Chimaev possesses, but he’s also quick to hit the pause button when it comes to his championship aspirations right now without truly proving himself against the best welterweights in the UFC.

“Even if we all agree right now that [Khamzat Chimaev is] the best guy in the division, hands down, you’ve got to prove first of all to me and I’m sure to the UFC staff that you can make welterweight easier than you did the last time,” Felder said. “That was a s*** show.

“I was in the room for those weigh-ins and I’m not saying that he didn’t make weight, but he was a mess. Obviously he tried to manipulate [the situation], they pulled the towel away, they made him go to the back and they made him come back out again. You’ve got to prove you’re a welterweight. Because you might be the future [185] pound champion but you’ve got to get that weight under control.”

Chimaev did face some scrutiny when he stepped on the scale ahead of his win over Li Jingliang at UFC 267, but ultimately he made the welterweight limit.

He’ll need to do that again in April for the fight against Burns, who is looking to stop the hype surrounding Chimaev while seeking to put himself back in title contention as well.

A win is anything but guaranteed, but if Chimaev is successful that will go a long way towards proving he really is a legitimate challenger to Usman’s title. But he has to get through Burns first.

“He’s so talented,” Felder said of Chimaev. “But he’s got to beat some of these guys that have been working.”