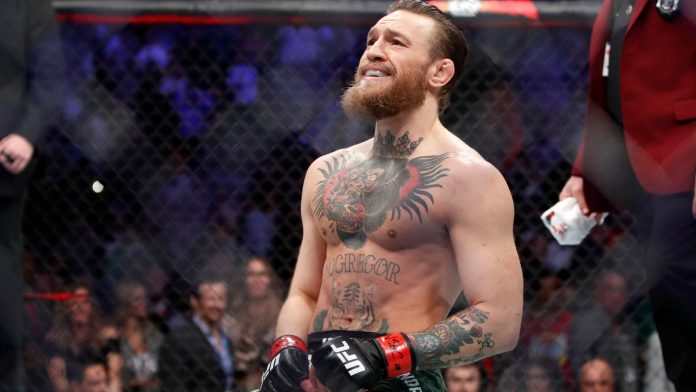 CONOR MCGREGOR plans to ‘blend’ his old karate style with his recent boxing-heavy tactics for his comeback fight.

The UFC’s poster boy hasn’t made much use of his wide array of kicks since his boxing match with Floyd Mayweather in the summer of 2017.

McGregor, 33, is all too aware of the fact he’s deviated from what once used to be his bread and butter and plans to re-incorporate his explosive kicking game when he returns to the cage later this year.

He told LowKickMMA: “I’m shadowboxing a lot and I’m developing a [new] style.

“Do you know what I’m saying? A little bit of a blend [of the karate style and boxing].

“A hybrid. I feel if I was the same – If I look at the first fight with Poirier, it was the perfect blend of boxing and acrobatic martial arts.

“You know the spinning attacks and clean boxing.

“The second fight was more straight boxing and no kicks. The third fight was a little bit acrobatic martial arts and no boxing.

“So I might kind of go back and blend them back in again. It’s a balance, it’s about finding that balance.

“Rent is due every day, we build and we get better. I’m happy with my ground strikes from the bottom and I think people are going to start respecting different aspects of my game.

McGregor is in the final stages of recovering from the horrific broken leg he suffered in his trilogy fight with Dustin Poirier last July.

The proud Irishman is champing at the bit to get back inside the cage, saying: “There’s been a lot achieved but a lot still to go.

MMA mogul McGregor has set his sights on a summer return to the octagon, but UFC president Dana White expects the Dubliner to be back in action in the autumn.

He told SunSport earlier this month: “We’re looking at early fall, if everything goes right.”

That timeline is contingent on doctors giving McGregor the all-clear to resume full martial arts training in the coming months.

White added: “If his leg heals right and he gets the clearance to really start training, then possibly early fall.”