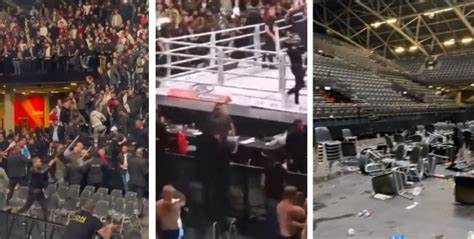 A night of elite-level kickboxing ended in disgrace following the breakout of a riot during Badr Hari and Arkadiusz Wrzosek’s highly-anticipated rematch at Glory 80.

The atmosphere at the Trixxo Arena in Hasselt (Belgium) was tense from the very get go, as large contingents of Badr Hari and Arkadiusz Wrzosek supporters made their presence felt early in the night.

Expectations for the rematch were high following a legendary first fight between the two men back in September 2021.

On that occasion, Poland’s Wrzosek recovered from three early knockdowns to produce a devastating head kick in the second round and claim a historic comeback victory.

This Saturday night, the two men entered the ring for the penultimate fight of the Glory 80 event – acting as chief support for a main event which should have seen Dutchman Levi Rigters take on Morocco’s Jamal Ben Saddik.

Hari enjoyed a strong opening round, but was knocked to the canvas in the second after enduring a brutal flying knee. The Moroccan legend got up to his feet and made it though the round as fans anticipated a thrilling finale.

Instead, the third round never got going following the breakout of a riot outside the ring. Chair were thrown and panic ensued as security lost all control of the situation.

The fight was initially halted before an announcement confirmed the cancellation of the bout – and ultimately the show.

Despite pleas from Wrzosek and Melvin Manhoef, the situation showed no signs of stopping as chairs and bottles continued to be launched across the venue.

According to Dutch news outlet AD, Wrzosek was supported in the arena by Legia Warsaw fans – a club which the fighter himself supports. They were reportedly joined by ADO Den Haag supporters as fans of the two football clubs maintain a friendly relationship.

There was also a large number of Hari’s supporters – known as ‘Badr Army’ – who followed the 37-year-old kickboxing and MMA legend to Belgium.

It is still unclear what instigated the riot, however a statement from Glory Kickboxing read: “GLORY deeply regrets that GLORY80 was interrupted by people exhibiting unsafe behaviour.

“We never condone or accept behaviour that endangers other fans that come to our events to enjoy a night of top sport.

“Upon the request of the police in the city of Hasselt, we stopped the event after the 2nd round of Hari – Wrzosek.

“We apologize to the fans who did not get to see the end of this bout and the Ben Saddik – Rigters matchup.

“Also to the athletes who trained so hard and did not get to compete. Martial arts is a sport of respect and fair competition inside and outside of the ring.”