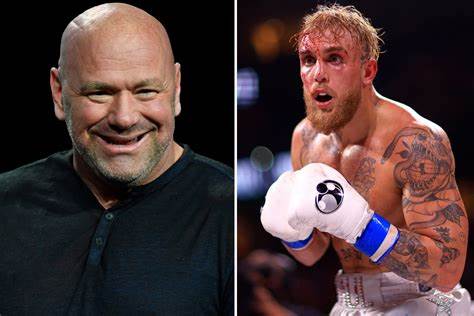 UFC president Dana has revealed he offered Jake Paul the chance to fight inside the octagon.

YouTuber turned boxer Paul has been publicly trolling White over fighter pay for the last six months but has vowed to stop his crusade if he fights inside the octagon.

And White quickly tested The Problem Child’s eagerness to set foot inside the cage by sending a lucrative fight offer his way.

“This just isn’t the place.”

He added: “I deal with the best in the world. The absolute best fighting the best. You tell me where he fits into this puzzle.”

The majority of Paul’s jibes at White – many of which have gone viral – have come via Twitter.

“Because he’s popular I should take his tweets seriously? He just sold 65,000 pay-per-view buys.

“And I’m not s****ing on the kid. We’re the biggest fight-promotion company in the history of the world.

“No I don’t take his tweets seriously.”

Paul, 25, has been doing his best to goad MMA megastar Conor McGregor into fighting him in the cage or the boxing ring.

But White insists the fight doesn’t make sense for cruiserweight Paul, telling ESPN: “That kid couldn’t even make 170, that’s how big he is.

“I mean he’s calling out these guys.

“Do you want to see that fight? Then why are you even asking me? Why are we even talking about this?

He added: “Why isn’t he calling out Israel Adesanya? I know, I know and you know, everybody else knows and he knows, too.”

Dana White reveals he made UFC ‘offer’ to Jake Paul after YouTuber demanded MMA chief let him fight in the octagon (thesun.co.uk)