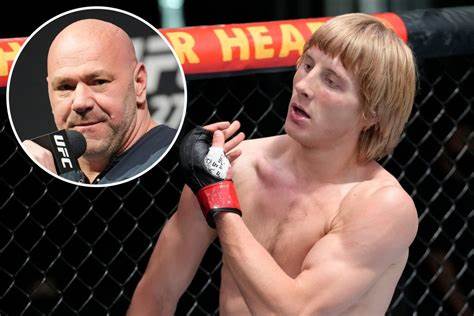 UFC president Dana White reckons Paddy Pimblett has all the makings of a future superstar – but the promotion won’t throw him in at the deep end of the lightweight division too early.

The former Cage Warriors featherweight champion burst onto the UFC scene last September with a stunning first-round victory over Luigi Vendramini at the Apex.

The Scouse submission specialist has resonated with fans across the world with his confidence and no-nonsense style inside and outside of the cage.

And White himself is one of the fight fans firmly on onboard The Baddy train, telling SunSport this week: “He’s got a great personality, people love him.

The UFC brass noticed Pimblett’s potential to be the promotion’s next breakout star well before he brutally put Vendramini to sleep in their Sin City showdown.

The veteran promoter, 52, said of Liverpool’s latest mixed martial arts sensation: “We noticed from the moment he set foot here that this kid has the potential to be a star.”

The challenge now for Pimblett is to consistently win fights in MMA’s elite promotion, which has chewed up and spat out many a highly-touted prospect.

White warned Next Generation MMA’s rising star: “But you’ve got to win fights now. And this is a tough place to keep winning.”

Pimblett, 27, will look to earn his second UFC victory on Saturday night on the main card of UFC London.

The UK fan favourite has been handed the tough and grizzly Kazula Vargas for his second octagon outing.

An emphatic victory over the Mexican could kickstart an assault on the lightweight division’s top-15 – which is arguably the most stacked in the promotion.

But White doesn’t foresee himself or the UFC brass throwing the entertaining Pimblett to the wolves anytime soon.

“Our matchmakers do a great job when it comes to getting guys the right fights at the right time.”

Dana White says Paddy Pimblett has potential to become a huge star and says UFC London has ‘got that thing people like’ (thesun.co.uk)