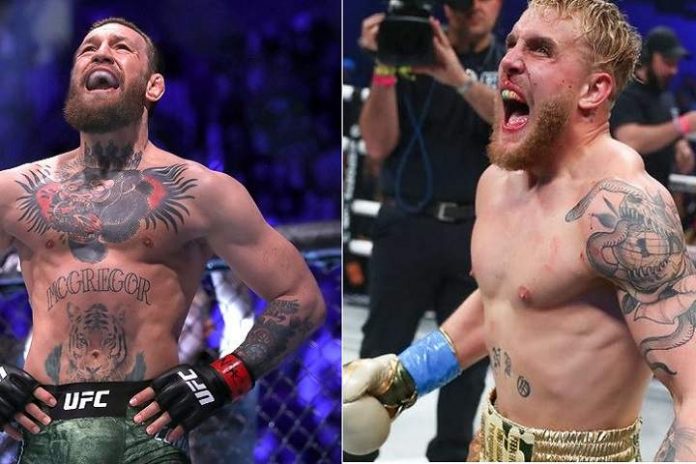 JAKE PAUL has hit out at Dana White for saying he is ‘too big’ to fight Conor McGregor – proposing a 175lb catchweight.

The YouTube star and 5-0 boxer has continuously tried to temp and goad McGregor into the ring.

But Paul has since revealed he is ready to face the Irishman in the UFC octagon – only to see the idea shot down on his brother’s podcast.

White said on Impaulsive: “He shouldn’t even be fighting Conor McGregor. These guys are f***ing huge.

But the ex-UFC champion has bulked up while training for his return and in December boasted he was weighing 190lb of ‘granite’.

The highest McGregor fought at was 170lb (12st) – with Paul ready to meet in the middle as he talked down a weight discrepancy.

Paul tweeted: “Dana White is begging for Diaz and Conor to fight for a third time…they have fought at 170 pounds in both their fights.

Paul, yet to fight a recognised boxer, has knocked out a YouTuber, ex-NBA player and two former UFC fighters.

But he is now ready to crossover to the cage and set out a proposal which could see him donate his ENTIRE purse if he lost to McGregor.

Paul posted: “Dana – Since you like me now, how about a 1 fight UFC deal to fight Conor.

“If I win, you agree to my UFC fighter pay and healthcare proposal.

“If I lose I donate my entire purse to all UFC fighters who make less than $50K a fight and never mention UFC again Deal?”

Conor McGregor called out to 175lb fight by Jake Paul as YouTuber slams UFC boss Dana White for saying he is ‘too big’ (thesun.co.uk)