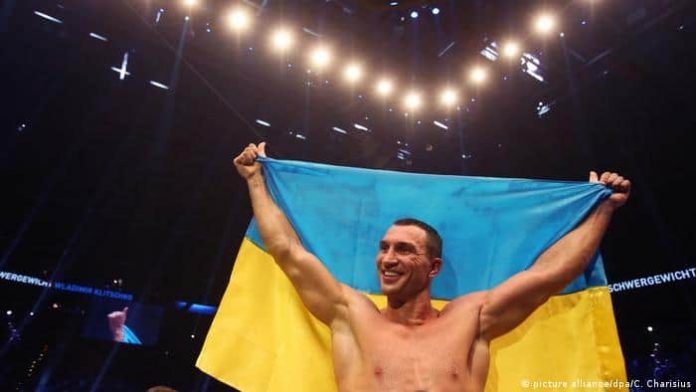 BOXING star Wladimir Klitschko has said he’s in the “biggest fight” of his life as he battles against Vladimir Putin’s troops.

The former heavyweight champ is out defending Ukraine alongside his brother Vitali, who is the mayor of the besieged capital, Kyiv.

Brave Wladimir has called for world leaders to “act now” as Putin’s bloody war rages on – with innocent civilians being killed as shells rain down.

“Boxing is sport – this is war, and our people are dying,” he told the Mirror.

“Innocent women, children and civilians will be subjected to bombs, missiles and horrifying reality of war. People say this is the biggest fight of my life, and I agree – it’s so sad to realise how terrifying the war is.”

Hero Wladimir has urged other countries to take more action against Putin as thousands of terrified Ukrainians continue to flee their homes.

“Our military personnel are defending the honour of an independent and free Ukraine,” he told the outlet.

“I want to thank the people of Great Britain for sharing our story with the world, but with each passing moment the situation becomes more serious and Ukrainians are dying.

“It’s important to act now in any way possible. Don’t wait for a few weeks, don’t delay because every single minute, every single hour of every day counts.”

But Wladimir praised other countries for isolating Russia from sporting competitions – describing such sanctions as “crucially important”.

“To isolate Russia from all sporting competition is not an act of aggression,” he added.

“We do this to stop the war, in the name of peace. I have nothing personal against the athletes, but I have a lot against the aggression of Russian leader Putin.”

It comes after the boxer took a step back from the front line to visit a maternity ward where 82 babies have been born since the invasion began.

He shared heartwarming footage from inside the Kyiv hospital of two of the tiny babies.

“Eighty-two kids were born just in this hospital since the beginning of the war.

“More Ukrainians are coming up and will arrive daily.”

In a tweet alongside the clip, he added: “There are very precious moments in life. Even in desperate, challenging times like these.”

Just days ago, Vitali, 50, told Sky News that he and Wladimir – who are reportedly on the Russian “kill list” of senior Ukrainians – had “killed some people, I guess six people last night”.

And the elder brother defiantly claimed they were “ready to die for their home” and showed no fear of Russian forces when talking to CNN.

He said: “We’re not interested in how strong the Russian army is, we’re ready to fight.

“And we’re ready to die for our home country and for our families because it’s our home.

“It’s our future and somebody wants to come to our home and steal our future from us.”

Meanwhile, Vitali was pictured kissing a bride for good luck after she and her Ukrainian soldier partner tied the knot on the front line in Kyiv.

It comes as US intelligence chiefs have warned Putin could unleash mini-nukes in a warning to Nato if his “clusterf**k” invasion continues.

CIA Director William Burns told US lawmakers the long-standing Russian leader has been “stewing in a combustible combination of grievance and ambition for many years”.

Speaking at a House Intelligence Committee hearing on Tuesday, the heads of the CIA, Defense Intelligence Agency and National Security Agency gave their grave assessment of Putin’s intentions.

Meanwhile, Russia’s stranded troops are facing freezing to death in their tanks as Putin’s military becomes bogged down in the mud and an unwinnable war in Ukraine, sources claim.

A 40-mile long convoy of tanks and armoured vehicles remains trapped outside Kyiv, more than a week after launching their assault on the Ukrainian capital.

As a sudden cold snap sends temperatures in Eastern Europe plunging to -10C overnight – or -20C including windchill – Russian troops are trapped in what one ex-soldier called “40-ton iron freezers”.

Icy conditions are also set to make life even harder for Putin‘s invaders, who have been stuck around 20 miles from Kyiv for days amid mechanical problems, fuel supply issues, and solid Ukrainian resistance.

Just south of Antonov, in the besieged city of Irpin, a badly-damaged bridge can be seen, further slowing down the Russian advance.

Traffic can be seen queuing around the bridge, suggesting Russia’s military may be continuing to press on towards Kyiv after two weeks of slow progress.

Boxing legend Wladimir Klitschko says he’s in the ‘biggest fight of my life’ as he wages war on Putin’s troops (thesun.co.uk)