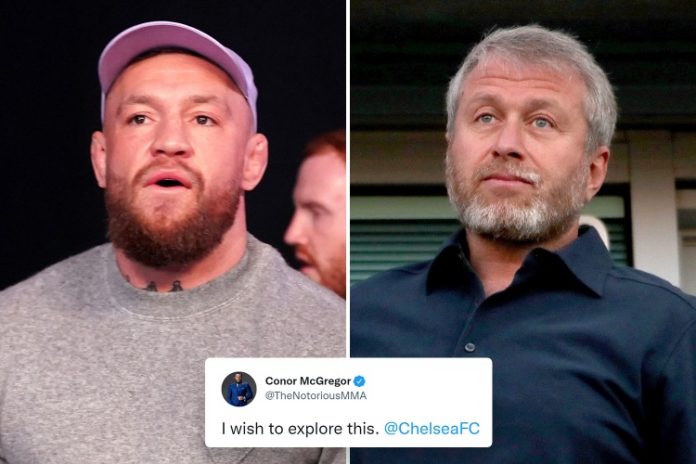 UFC megastar Conor McGregor has sensationally claimed he is OPEN to buying Chelsea.

The European champions’ Russian owner Roman Abramovich is looking to sell the club for in excess of £3BILLION.

And Abramovich is prepared to do a deal within DAYS if he gets the offer he wants with the threat of UK Government sanctions hanging over his head in the wake of Russia’s invasion of neighbouring Ukraine.

UFC star McGregor, 33, has hinted he’d be open to discussing it and let Chelsea know.

He said on Twitter: “I wish to explore this. @ChelseaFC.”

It’s not the first time the Manchester United fan has expressed his interest of owning a sports team.

He has also expressed his interest in owning Man Utd.

McGregor has an estimated fortune of £180m but it could be considerably higher after he sold a majority stake in his Proper Twelve whiskey company, worth around £423m at the time.

Swiss billionaire Hansjorg Wyss is also interested in buying the West London club and claims he has been approached by Abramovich.

“Like all other oligarchs, he is also in a panic.

“Abramovich is trying to sell all his villas in England. He also wants to get rid of Chelsea quickly.

“I and three other people received an offer on Tuesday to buy Chelsea from Abramovich.”

Wyss says Abramovich is asking for too much money to buy the club, with the Blues believed to owe the Russian £2bn.

He continued: “I have to wait four to five days now. Abramovich is currently asking far too much. You know, Chelsea owe him £2billion.

“But Chelsea has no money. What it means is that anyone who buys Chelsea should have to compensate Abramovich.

“As of today, we don’t know the exact selling price.

“I can well imagine starting at Chelsea with partners. But I have to examine the general conditions first.

“What I can already say is this: I’m definitely not doing something like this alone. If I buy Chelsea, then it would be with a consortium consisting of six to seven investors.”

Conor McGregor sensationally claims he is open to buying Chelsea as Roman Abramovich tries to sell club for £3billion (thesun.co.uk)