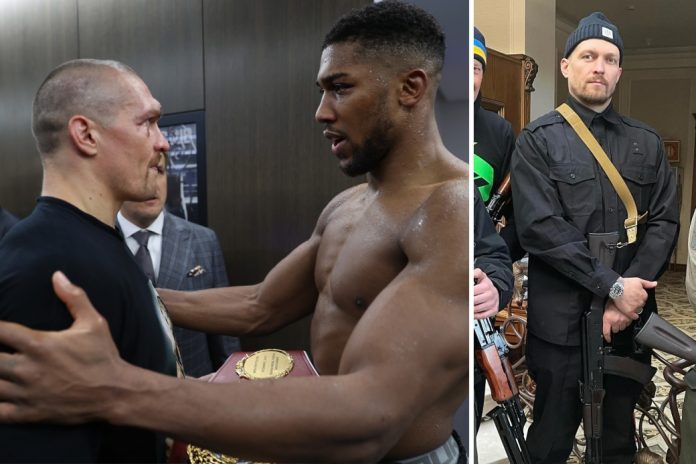 ANTHONY JOSHUA has forgotten his rivalry with Oleksandr Usyk and sent a message of support amid Russia’s invasion of Ukraine.

It comes following the news Usyk has taken up arms in Ukraine’s desperate fight against Vladimir Putin’s Russia.

The unified heavyweight champion in September dethroned AJ and the pair are contracted to an immediate rematch.

But the crisis in Ukraine leaves their second fight in doubt – although Joshua, 32, has sent his support to Usyk, 35.

He told iFL TV: “I’ve learned sports and politics go hand in hand. They are powerful voices and it is good they are speaking up.

“They are not pushing for war, they are saying let’s find peace so good luck to them.”

Usyk has joined the Kyiv Territorial Defence and slung a machine gun over his giant shoulder.

He has joined best friend and Vasiliy Lomachenko and legendary boxing brothers Wladimir and Kyiv mayor Vitali in swapping gloves for guns.

He also met with Joshua’s promoter Eddie Hearn for talks on a date and venue for the heavyweight rematch.

But the fearless southpaw returned straight back into the warzone and posted a string of emotional videos to Putin and the invading Russian hordes, before finally arming himself on Monday.

The AJ rematch, which Hearn has been hoping to stage in late May or early June, now seems certain to be delayed.

Married father-of-three Usyk clearly has far more important things on his mind and he has appealed directly to the Russian people for help.

In an Instagram video, he said: “Good morning to everybody. My name is Oleksandr Usyk. I’d like to speak to the people of Russia.

“If we consider ourselves as brothers, Orthodox ones, do not send your children to our country, do not fight with us.

“Also I’m addressing this to the President, Vladimir Putin. You can stop this war.

“Please just sit down and negotiate it with us without claims. Our kids, wives, grannies are hiding in the basements.

“We are here in our own country, we cannot do it any other way. We are defending. Stop this war, stop it. No War.”