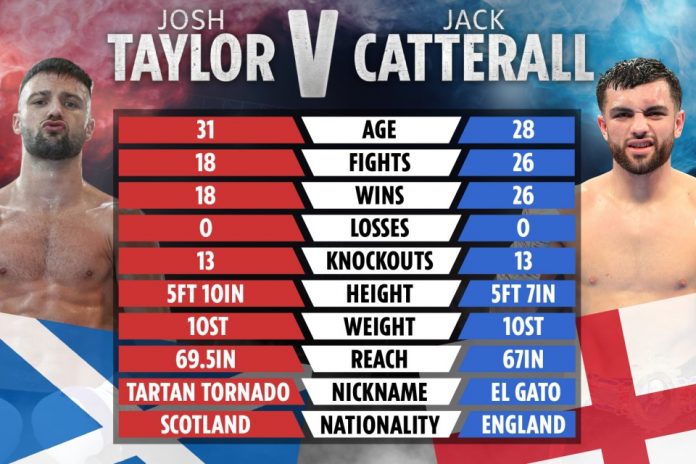 Josh Taylor vs Jack Catterall tale of the tape: How Scot and Englishman compare ahead of huge undisputed title fight

JOSH TAYLOR is looking to secure a defence of his undisputed throne before moving up to the glamoured welterweight division.

But challenger Jack Catterall, also unbeaten like the Scottish champion, will have something to say about that.

Catterall agreed to forfeit his mandatory shot at the WBO belt to allow Taylor into a unification in May with Jose Ramirez.

The hard-as-nails southpaw beat Ramirez in world class fashion but owes his English rival a title shot for stepping aside.

Bad blood between the pair has been growing, meaning British boxing fans are treated to another grudge match.

Taylor was an elite amateur, winning gold for Scotland in the 2014 Commonwealth Games, two years after representing Team GB in the London Olympics.

Catterall, 28, meanwhile also had a stellar run in the unpaid ranks, turning over with a 48–18 record and winning junior titles.

Taylor, 31, debuted as a professional in 2015, in America, and was quickly fast tracked due to his skills and promise.

Only seven fights in, he won the Commonwealth title and a year later beat Ohara Davies, 30, in a big domestic headliner.

Viktor Postol, 38, in his 13th bout, was a career highlight until winning the IBF world title against Ivan Baranchyk, 29, in 2019.

That was in the semi-final of the World Boxing Super Series, and Taylor would beat Regis Prograis, 33, to win the tournament and also the WBA strap.

Only two fights and two years later and Taylor outpointed Ramirez, 29, to be crowned WBC, WBA, IBF and WBO undisputed king at just 18-0.

Catterall also has respectable names like Davies and Tyrone McKenna, 31, on his record, but has not been at anything like the level of Taylor.

The challenger has had eight more fights, at 26-0 and they both have the same number of knockouts on their records, 13.

Taylor is big at the weight and eyeing a move to the 147lb welterweight division.

Both are southpaws with rapid hands and slick styles, but Taylor is a deserved favourite heading into the clash.

Josh Taylor vs Jack Catterall tale of the tape: How Scot and Englishman compare ahead of huge undisputed title fight (thesun.co.uk)