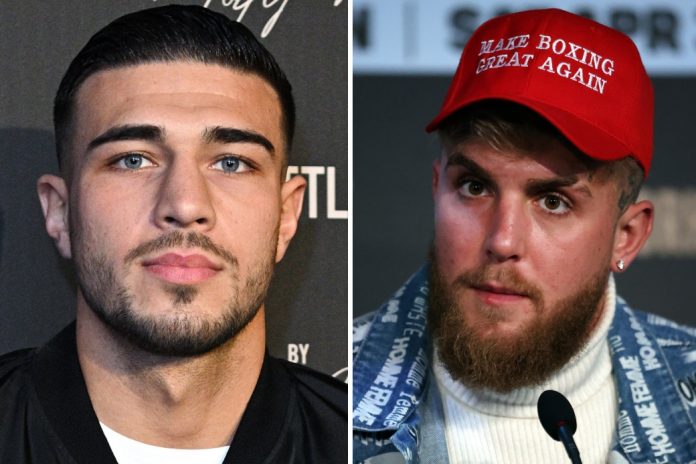 TOMMY FURY wants to make his return on brother Tyson’s undercard – hoping to make enough noise to reschedule his fight with Jake Paul.

The 2019 Love Island star pulled out of his celebrity grudge match against Paul in December with a broken rib and chest infection.

Fury is adamant he is not pinning his boxing hopes on fighting the American YouTuber.

But he is still willing to settle the score once and for all, with his promoter Frank Warren still trying to renegotiate with Paul.

Fury, 22, told Sky Sports: “I’d like to see the fight happen back end of the year.

“I’m not really really waiting around for him, he knows I’m here and I’m ready to fight at all times. I’ve put that out there countless times.

“I’m not the issue here, if we wanted to fight the man would have rescheduled date by now but the ball’s in his court.

“I’m ready to fight whenever. I’d like to see the fight happen at the end of the year.

“I know Frank is still trying to reach out to him and stuff like that.”

Paul, 25, is now 5-0 in his career and knocked out Fury’s replacement Tyron Woodley, 39, in round six of their late-notice rematch.

He had initially beaten the ex-UFC champion on points only four months earlier.

But he is still yet to fight an opponent with prior professional boxing experience, with Fury hoping to be that man.

Paul had demanded his British rival make an appearance on big brother Tyson’s undercard to earn the right to reschedule their clash.

He said: “I do think the fight is still there because, he’s no daft, who else is he going to fight? He’s got nobody else to fight.

“This fight is the biggest fight for him to take at the minute and he knows that full well.

“But I think I’m looking to get a run out on Tyson’s undercard next, that’s the plan moving forward and then we’ll try set that fight up at the end of the year.”