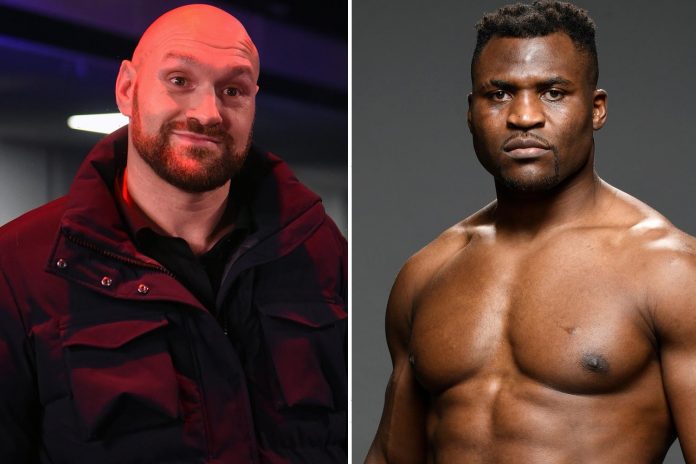 TYSON FURY says he is eyeing a ‘massive fight’ against UFC champion Francis Ngannou next year.

And the boxing superstar predicts the Las Vegas bout will ‘break all pay-per-view records’.

Fury, 33, has a busy schedule in 2022 as he prepares to defend his WBC crown against Dillian Whyte on April 23.

Should he win, Fury is then likely to fight either Oleksandr Usyk or Anthony Joshua to unify the heavyweight division.

But the Gypsy King is already making plans for 2023 by lining up a mega-scrap with UFC heavyweight king Ngannou.

But he is set to miss the rest of the year as he recovers from knee surgery.

And with his UFC deal expiring at the end of 2022, Ngannou would be free to take up a fight against Fury in the boxing ring.

Las Vegas would be the destination for the bout, and it would take place this time next year.

Fury told IFL: “I am going to fight Francis Ngannou in Las Vegas next year – in March or February.

“There’s been no talks this year because I have got some boxing to do.

“But next year we can have some crazy fights. It’s a massive fight.

“I believe it breaks all pay-per-view records in the United States. Two heavyweight champions going head to head.”

Indeed, Ngannou is keen to make the transition to boxing, telling TMZ: “This is going to happen either way.

“Even if I stay, if or when the UFC and I finalise a deal, the boxing part has to be in it. I can’t see myself retiring without boxing.

“I would like to test myself to their level. It’s not the same sport but I’m the champion, so I’m top in this division.

“At the end of the day, it’s just about throwing hands, throwing punches, having a good delivery system to throw those bombs.

“I’m sure that if I deliver my own punches pretty good, I can do some damage.”

However, should Ngannou extend his UFC deal, he may find it difficult persuading boss Dana White to set up a fight against Fury.

White said at the weekend: “The fact that they [the boxing world champions] are even talking about our guys shows you where boxing is at.

“Boxing’s been a mess for a long time and it’s not going to get straightened out any time soon.