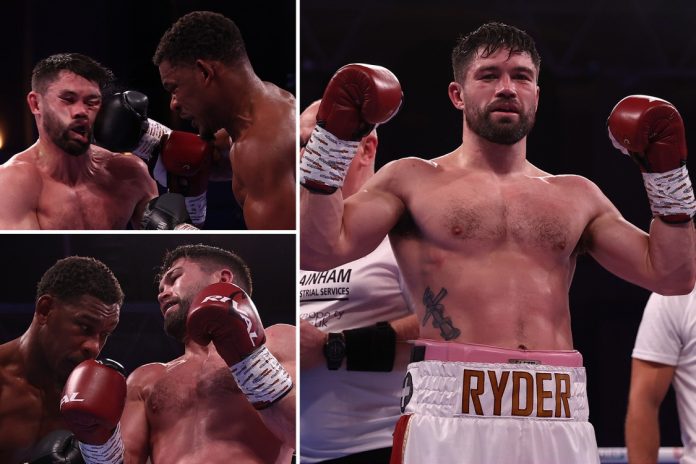 At his local Ally Pally arena, the 33-year-old Islington ace threw the opening six rounds away to the visiting American.

But the southpaw rallied heroically in the second half and made up for the cruel 2019 world title loss he suffered when he boldly went to Liverpool and Callum Smith landed a harsh home decision.

Jacobs, 35, had been out of the ring for over a year but he raced into a lead by peppering a sleeper Ryder.

But he turned it around and kept his super-middleweight world title dream alive by digging in and salvaging a split decision after the three ringside judges scored the bout 115-113 Jacobs and 115-113 twice for Ryder.

Jacobs reddened Ryder’s nose with a stiff right hand in the opener, hushing the crowd and the local staggered backwards when another right rifled into his ribcage.

The Brooklyn ace was confident enough to switch stance in the second and cracked Ryder with a southpaw lead right hook.

Ryder was clipped with an arrow for a straight right in the third and the Englishman was struggling to stop Jacobs bank the early rounds.

A double jab teed up another Jacobs right hand at the start of the fourth, it bludgeoned Ryder’s nose but he absorbed it bravely.

Ryder never stopped marching forward but the North London leftie was walking on to all manner of Jacobs shots.

Ryder enjoyed almost all of the fifth and looked set to bank his first clear round but Jacobs stepped on the gas in the last 30 seconds and landed a handful of spiteful right hands that snatched the session back and bruised the Brit.

Again, in the sixth, Ryder made a strong start and looked set to secure a stanza with the judges.

But Jacobs waited until the final 30 seconds to land a peach of a right hook and then rock Ryder’s head back with a couple of straight shots.

Ryder was warned for hitting on the break but seconds later it seemed worth the risk as Jacobs threatened to unravel.

The Englishman landed half a dozen clean crisp shots that had the Brooklyner wobbled and worried but he made it to the bell.

Ryder was great in round eight too, blending rough-house tactics with precision punching and pummelling Jacobs into a daze he made it back to his stool in.

Jacobs had aged horribly by the end of the ninth, as Ryder’s relentlessness started to turn the tide of the thrilling row.

Ten was nip and tuck until the very end when Ryder connected with a couple of crisp digs that jolted Jacob’s head back.

By the 11th, Jacobs’ ringside family were begging him to abandon his southpaw tactics as it was helping Ryder with his best moments.

Both breathless warriors connected with digs in the 12th and the final punch both men threw was to touch gloves to end a brilliant old-school affair.