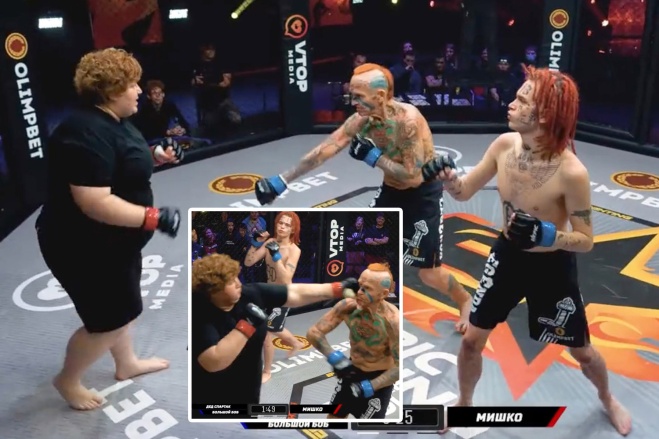 The Russian MMA promotion has become notorious for staging freakshow fights during its brief run.

But their booking of a handicap match-up featuring a 75-year-old and his grandson really raised eyebrows among fight fans.

But their numerical advantage mattered little as they were battered from pillar to post.

Pensioner Spartak was the aggressor early doors, while his hesitant grandson hung back to get a read on their opponent.

Mishko well and truly upped the ante in the second round when dropped BOTH of her opponents.

The 28-year-old sent Spartak to the canvas with a big one-two combination.

And she dropped Igibob moments later with a nasty uppercut before dropping bombs on her fallen opponent.

Granddad Spartak quickly came to the rescue and got the 268lb Mishko off his grandson.

Spartak paid the price for his intervention in the third round when he was walloped to the canvas by a haymaker.

Despite their fighter being outnumbered, Mishko’s corner weren’t at all concerned for her safety.

In fact, they couldn’t contain their laughter as she put a one-sided beatdown on the pair.

Remarkably, the fight – if you can call it that – went to the judges’ scorecards.

And they controversially denied Mishko of a hard-earned victory by scoring the contest a draw.

MMA fans were left appalled by the contest, with one tweeting: “Is it funny or pathetic?

Another said: “Bro, look at these crazy-ass Russians. TF they got going over there, bruh?”

And another said: “This is absolutely terrible.”

Chistyakov tipped the scales at an incredible 240KG – a staggering 27 STONE HEAVIER than his opponent.

Despite having some success with her striking, Stepakova ultimately succumbed to the sheer size of Chistyakov, who won their showdown via decision.