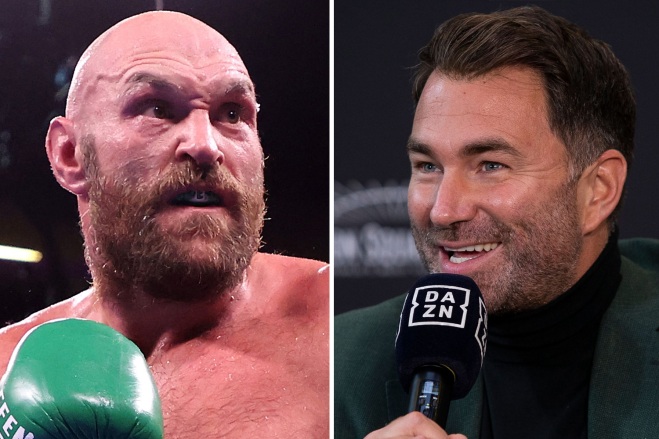 BOXING promoter Eddie Hearn has admitted he doesn’t ‘trust’ WBC heavyweight champion Tyson Fury as he reveals the Brit DID NOT want to fight Oleksandr Usyk.

Fury reportedly wanted a warm-up fight in March before fighting to become the first undisputed king of the division in over two decades.

Fury, instead, will defend his heavyweight crown against mandatory challenger Dillian Whyte.

And Usyk will face Anthony Joshua in a rematch after step-aside money became an unfeasible proposition.

The Matchroom chief revealed to FightHype.com: “Everyone talks about the step aside money and all that, [but] the goalposts kept changing.

“Joshua never signed for that model, we were still talking. He never wanted to do it, but it became quite a smart plan, in my eyes.

“Then Tyson Fury said: ‘I’m not fighting Usyk immediately, I would like a warm-up fight on March 26.’

“I don’t trust Tyson Fury anyway to fight AJ after Usyk. I definitely don’t trust him to go March 26, [then fight in] June and December.

“We went back and said no to that March fight. We tried to renegotiate that whole deal and Fury said: ‘No, I don’t want to fight Usyk straight away.’

“Then he has to fight Whyte.

“You never know if he will fight Whyte. I would not be surprised if that fight doesn’t happen.

“Until we see a contract for that fight and they’ve paid the money, what do you expect him to do?

“This is the opportunity Dillian has wanted for a long time. He will be there. Will Tyson be there? We’ll see.”