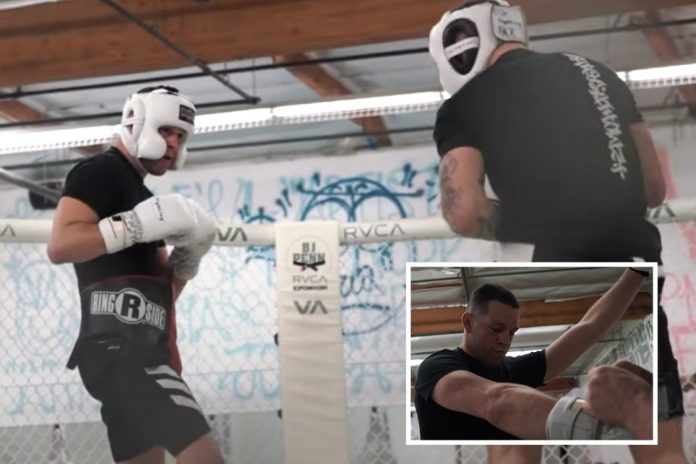 Veteran Diaz shared a training montage to his YouTube channel while in camp with team-mate Nick Maximov.

Maximov, 24, is training to fight Punahele Soriano, 29, in a UFC Fight Night bill.

Diaz, 36, is yet to return since defeat to British welterweight Leon Edwards, 30, at UFC 263 in June.

The American has called to return in the near future and was rumoured to be in negotiations with Dustin Poirier.

UFC president Dana White recently opened the door the grudge match and confirmed it is a possibility.

During an ESPN+ fan Q&A, White said: “It’s a fight that they both want and it’s one that we’re interested in.

He added: “I don’t know if that’s the fight by the time we’re ready.

“But like I said, we’ve got fights made up all the way until May 21 right now. So yeah, we’re interested.”

“I don’t know if that’s the fight by the time we’re ready.

“But like I said, we’ve got fights made up all the way until May 21 right now. So yeah, we’re interested.”

The pair were set to fight in 2018 at UFC 230 until it was cancelled and have rivalled ever since.

Diaz is also linked with a trilogy bout against Conor McGregor, with the two tied at one apiece in their series.

McGregor, 33, is currently nursing the broken tibia he suffered against Poirier, 33, in July, and White named Diaz as a potential opponent for his return.

He said: “It could be. I think Conor will be back in summer. But I don’t know for sure. It depends on how his leg heals.

“There are a million things that could happen between now and then. To even speculate is stupid. I’ve stopped doing that.

“When McGregor contacts me and tells me he’s ready to start training 100 per cent, then we’ll start talking about what’s possible for Conor.”