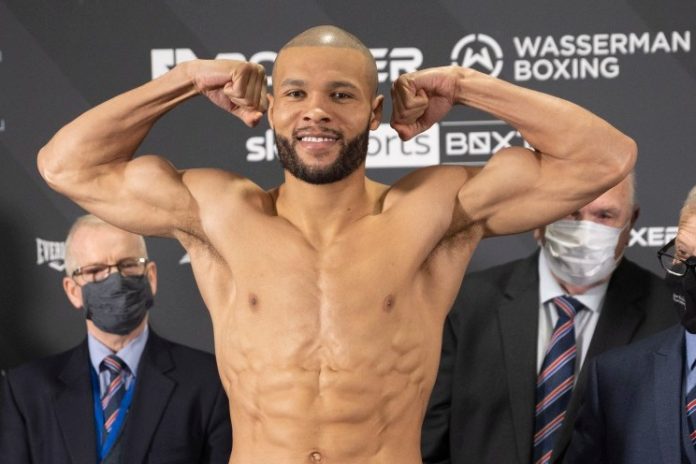 Eubank Jr on how his anatomy makes him perfect boxer, from granite chin to ripped stomach despite scoffing ice cream

CHRIS EUBANK JR has famous fighting blood and a granite chin – but does the rest of his anatomy make him a potential world champion?

The son of British ring legend Chris Sr – a bonafide two-weight champ – is yet to land a major world title at his dad’s old middle and super-middle stomping grounds.

But winning his bitter grudge match with Wales’ Liam Williams in a hostile Cardiff on Saturday should catapult the 32-year-old boxer into major fights later this year.

And Eubank Jr went through his ripped body with SunSport to explain why he is a lean, mean fighting machine.

Eubank Jr: I have thought at a higher level throughout my career and handled more pressure.

I am a smarter fighter, more prepared and disciplined. I also have a better trainer in Roy Jones Jr who creates the strategy.

My self-belief is huge, I never see anyone as too big or too bad to fight and beat.

I think mindset means much more than athletic ability, if you are willing to do anything it takes to win, it sets you apart.

My chin is granite, rock, unmoveable, unbreakable. I have never been knocked down in a fight or even sparring.

I am very well off but I always want more, I have not made all the money I want to make so I am still hungry.

There are things I need to achieve in and out of boxing. My heart and desire is burning even though I have nice houses and cars.

I am a very old-school fighter in terms of the way I train but I don’t do the famous early morning runs anymore. I do my boxing training in the day – sparring, bags, pads and then my cardio at night.

I believe in keeping the body active at night because that is when you fight, that’s my theory – but I also don’t like getting up in the morning.

I am blessed with a very fast metabolism, no matter what I eat I never put weight on easily. I have been eating Magnum ice creams in the build-up to this fight.

I have never binged or enjoyed fast food but I also don’t stick to a strict diet or employ a nutritionist.

I have documented all of my own fights camps, what and when I have eaten and how I have felt. I am old-school so I always stay in shape.

My power is up there with anyone in this division.

I put my shots together well and am always very accurate. I never waste shots and I feel I can hurt anyone.

I feel I have always had great footwork but I may have neglected to use it in one or two fights.

My footwork is much better than most fighters and having Roy with me means my feet have only improved and will continue to get better.

My genetics are a factor, some guys are born to be athletic and perform.

I have always been able to get a physique, go 12 rounds and run fast, since I was a kid.

But I have seen super fast and strong guys get beaten by the less athletic guy who is willing to die in the ring.

Eubank Jr. vs. Williams is live and exclusive on Sky Sports this Saturday from 7.30pm

Eubank Jr on how his anatomy makes him perfect boxer, from granite chin to ripped stomach despite scoffing ice cream (thesun.co.uk)