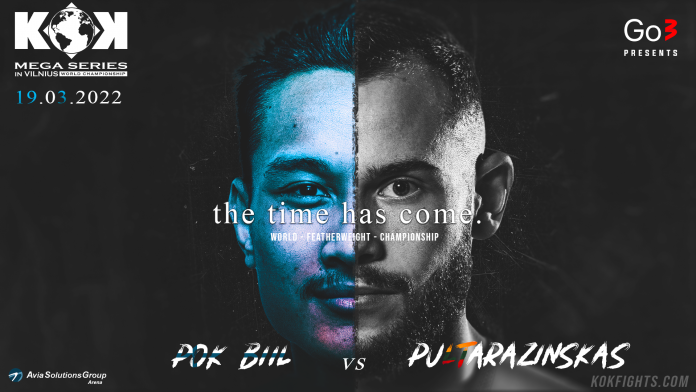 M.Pultarazinskas will strive to become a part of the history of martial arts: he will fight for the champion’s belt

Temporary KOK champion in the weight category up to 65 kilograms Matas Pultarazinskas is ready to become a big part of Lithuanian and world martial arts history: on March 19, in the “KOK’99 Mega series” event ring, he will meet with Pok Biil, a Thai living in Finland, for the champion’s belt.

“I have been waiting for this opportunity for a long time. I think I have proved more than once that I am worthy to fight for the champion’s belt, “said a student of the club” Titanas”.

In February 2020, Biil defeated “Sparta gym” fighter Igor Osinin in the fight for the champion’s belt in Helsinki.

The fight between P.Biil and M.Pultarazinskas was discussed even before Matas meeting in the ring with the representative of “Fighter House” Vitas Karosas. We will remind that M.Pultarazinskas won the victory with a minimal advantage after the extra round.

Matas coach Marius Misiunas did not talk much about the upcoming fight . ” We were waiting for this fight and we will be ready “.

Biil himself  said that he knows  what to expect from his opponent.

“I know that M. Pultarazinskas is a young, energetic and aggressive fighter. I think he will want to finish everything quick, he will go to the fight  ready, “said Biil.” I know that I can stop him to do so, and I can extend the fight till the fifth round. In the first round, I let my opponent show himself, and in the second and third rounds, I do my job because I’ll be ready for that. “