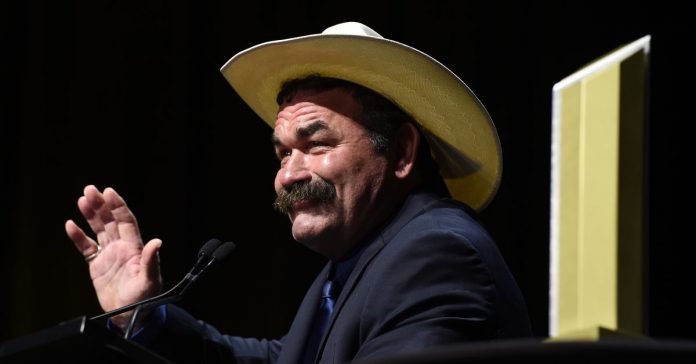 UFC and PRIDE legend Don Frye doesn’t appear to have lost too much of his famous hand speed. We know this because at this weekend’s UFC 270 event video captured Frye catching a fan on the chin with a quick right hand.

The video shows Frye seemingly in an argument with a man who has his back to the camera. At one point, two other men seem to try and cool tensions between the former fighter and the unidentified man. However, that doesn’t work as Frye is shown landing a quick punch. He is then ushered away.

Once separated Frye can be seen calling to the man he hit. That man then appears to walk further away from Frye.

The 56-year-old Frye was one of the more multi-dimensional fighters around during the early years of MMA. Mixing NCAA Division I calibre wrestling, submissions, and fast and powerful brawling to win the UFC 8 Tournament in 1996, defeating Gary Goodridge by in the final.

Later that year Frye was a runner up in the UFC 10 tournament, losing to Mark Coleman by TKO. A few months later Frye won his second UFC tournament in the calendar year, winning Ultimate 96 with a submissions over Goodridge, Mark Hall and Tank Abbott.

Frye then took his talents to Japan, where—in 2002—he engaged in one of the most legendary fights in MMA history. His wild brawl with Yoshihiro Takayama lasted just over six minutes and finished with one of the most memorable fight-ending sequences ever seen in the sport.

Frye was inducted into the UFC Hall of Fame in 2017.