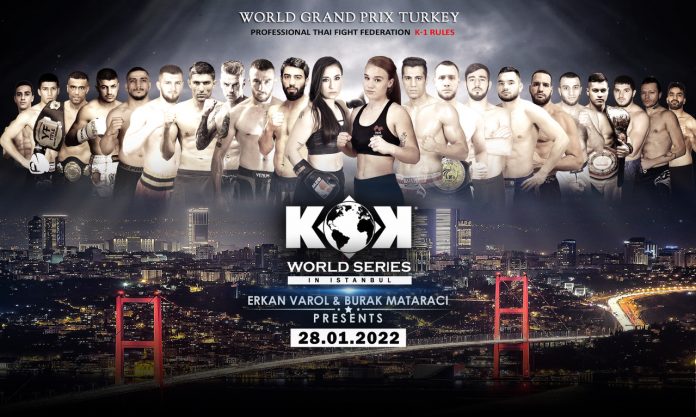 THE EYES OF THE WORLD WILL BE ON ISTANBUL

Professional Kickboxing Event KOK World Series in Istanbul will be held in one of the most popular sports arena ULKER SPORTS AND EVENT HALL in Istanbul, the 28th of January 2022. This will be the firsts KOK event in 2022. Best fighters of Turkey will compete against foreign competitors, each more ambitious than the other.

One of the most interesting evening fights KOK WORLD INTERIM Lightweight Title  fight will be Elkhan Aliyev vs Masoud Minaei.

Elkhan Aliyev won 4 GP tournament in London where Masoud Minaei has not experienced a single defeat in KOK tournaments. This will be exceptional kickboxing event in Turkey, with best fighters and even more better fights.

Fenerbahçe Ülker Sports and Event Hall is getting ready to host a big show. Many movie and music stars will come to Turkey for the King of Kings World Series Istanbul. Which will be broadcast live from 120 countries on January 28th.

The famous singer Willy William will open the night. Hollywood star Kristanna Loken, who has a huge fan base all over the world as the female Terminator. Ron Smoorenburg, one of the sought-after names of action movies. Tom Tidiman, known for Aquaman. And Jordan Jay Adams, one of the well-known talk showrunners of the USA, will be the guests of honor. Ukrainian singer Maya Muzaleva will end the night with the closing song.

Important names from the world of art and business such as Mustafa Sandal, Sibel Can, Engin Altan Düzyatan from Turkey will also participate in the organization. Don’t miss this amazing night. Supported by Bitexen and Elit Medya…