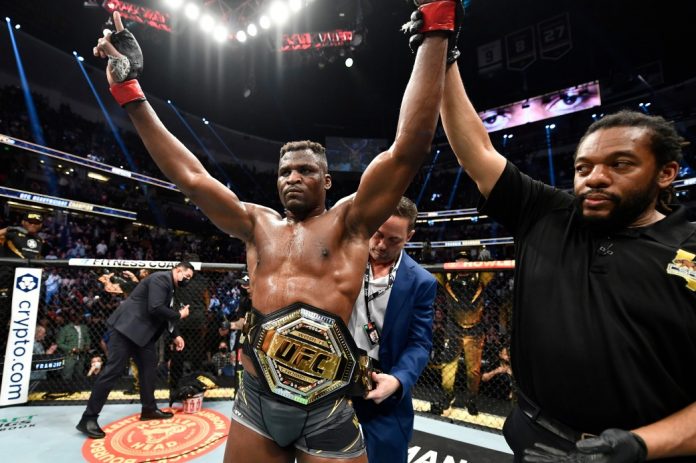 FRANCIS NGANNOU successfully defended his heavyweight title with a unanimous decision victory over Ciryl Gane in a huge title fight at UFC 270.

And in the co-main event of the evening, Deiveson Figueiredo reclaimed the flyweight title throne with a decision victory in a thrilling trilogy fight with Brandon Moreno.

Boxing on the mind

Following his decision victory over Ciryl Gane, Francis Ngannou made it clear that he’s not given up his dream of boxing professionally.

He told Joe Rogan: “As I always say, boxing is always in the back of my pocket. It’s something that I must do before the end of my career!

“And right now, I’m really looking towards any opportunity to get that because it’s not like I had a lifetime here.

“So I better start thinking about it.”

Ngannou vs Gane – Round Two

Another touch of gloves kicks off the round. Gane is more than happy to operate on the outside and allow a slow-looking Ngannou to plod forward.

Gane peepers the lead leg with kicks. But he gets cracked with a good shot coming in.

Gane clips the champ with a right hand after landing a body kick. Ngannou swings and missed with a huge overhand right. They clinch again before Gane pushes him off.

Spinning heel kick connects for Gane and draws a huge pop from the crowd.

Gane is playing with Ngannou at range is only in danger when he recklessly enters.

The big one is almost upon us

Undisputed champion Francis Ngannou and interim titleholder Ciryl Gane are set to throw down for all the marbles.

It won’t be long until we see which one of these former team-mates will have their hand raised.

Michel Pereira defeats Andre Fialho via unanimous decision, with all three judges scoring the contest 29-28 in his favour.

That’s four wins on the trot for the Brazilian, who will be hoping to re-book his cancelled bout with Muslim Salikhov.

Pereira vs Fialho – Round Three

A nice check hook lands for Pereira, who follows up with a nice combination.

Fialho is showing such a limited attack as he looks to close the distance, which is to his detriment.

Pereira is starting to slow down but is still landing shots. Fialho is still in the Brazilian’s face but is showing now versatility.

Pereira accidentally lands a front kick to the groin of Fialho and the action is paused.

The action resumes. The swing for the fences before the horn goes. We go to the judge’s scorecards.

Pereira vs Fialho – Round Two

Fialho is continuing to pour on the pressure but eats a big right hand from Pereira.

Fialho returns fire with a big left hand. A hard teep to the body pushes Fialho back.

Pereira narrowly misses with a rolling thunder kick. Pereira is investing heavily in the body now.

Pereira tries another flying knee but it’s blocked. They briefly clinch. Pereira misses with a wild spinning wheel kick before landing another good front kick to the body.

Pereira lands good knees to the body in the clunch. The Brazilian is now the aggressor.

Another front kick lands to the body from Peierea, who follows up with a big right hand.

Takedown for Pereira, but he’s unable to do anything before the end of the round.