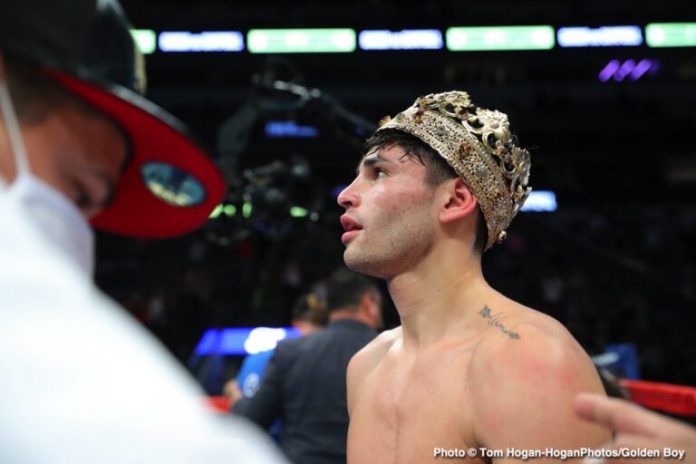 My Past Experiences With Heavyweight Champ “Iron” Mike Tyson!

By Jim Calfa: Ryan Garcia says there will be an announcement “coming soon” for his next fight on April 23rd on DAZN. However, it’s already been leaked that the unbeaten 23-year-old King Ry is facing Tevin Farmer next.

The former IBF 130-lb champion Farmer (30-5-1, 6 KOs) has been talking nonstop for the last week, hinting that he’s the one that will be facing the unbeaten former WBC interim lightweight champion Ryan Garcia (21-0, 18 KOs) next.

“I’m starting all interviews next week. I’m locked in.”

The fact that Farmer will start giving interviews next week on his next fight strongly suggests that DAZN and Golden Boy Promotions will announce at that time for the Ryan Garcia vs.  Tevin fight on April 23.

Tevin Farmer can use Ryan Garcia as a launching pad to restart his stalled career by beating the troubled Instagram star.

Some boxing fans will be disappointed to learn that Ryan is facing Farmer, as they were hoping he’d fight a relevant lightweight contender in Isaac ‘Pitbull’ Cruz next.

For the record, Golden Boy CEO Oscar De La Hoya maintains that Isaac Cruz turned down a “Lucrative offer”  for the Ryan Garcia fight. Still, with Pitbull’s promoter Sean Gibbons saying that wasn’t true, it creates doubt whether there ever was any effort made by Oscar to make the Garcia-Cruz fight.

There’s nothing wrong with former IBF super featherweight champion Farmer, as he once was an excellent fighter years ago, but the fact of the matter is, he hasn’t fought in two years since January 2020.

Over and above that, Farmer is coming off a convincing 12 round unanimous decision loss to Joseph ‘Jojo’ Diaz Jr. in the 130-lb division. Furthermore, Farmer lacks power and will have a difficult time gaining Ryan’s respect.

There are a lot of question marks about Ryan Garcia’s viability in the sport after his disastrous 2021 year in which he pulled out of two fights and had a mental health episode.

Ryan’s boxing fans have been jumping overboard, abandoning his leaking ship after seeing how unstable he’s been. It’s generally believed that Ryan’s main focus is social media and making money outside of the ring.

Already a millionaire with a net worth estimated at $10 million at age 23, Ryan doesn’t appear to have the same drive as the young fighters his age who work hard, stay busy, and strive to be the best.