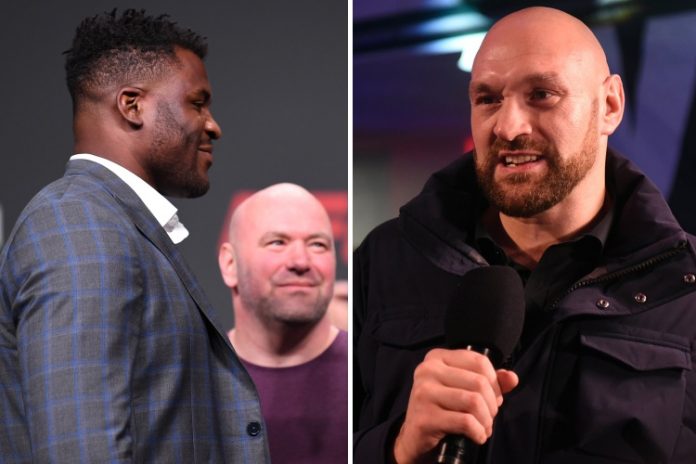 DANA WHITE said Tyson Fury called out Francis Ngannou because he needs ‘guys to fight’ and admitted: ‘It doesn’t surprise me’.

He said on Twitter: “Think of the clash of the titans, Fury vs Ngannou. Very excited, very excited.

“I think this would be an absolutely amazing fight, Las Vegas, the world would want to see it.

“The clash of the heavyweight titans.”

The MMA and boxing stars have built a steady rivalry in recent years that has seen the pair challenge other other.

But UFC fighters are banned from competing outside the promotion, unless given a special exemption.

Conor McGregor, 33, was given one in 2017 for his lucrative boxing loss to American legend Floyd Mayweather, 44.

No fighter has since been given such treatment – but Ngannou wants to put a stop to that.

Fury, 33, the WBC boxing belt holder since February 2020, has in the past teased a boxing match with UFC gloves on against Ngannou, 35.

But the Cameroonian has his sights set on a switch to boxing.

Ngannou defends his title against former training partner Ciryl Gane, 31, next on January 22.

It is the last fight on his UFC contract and Ngannou has threatened to walk out on the promotion amid a money row.

And if he is to extend his deal, he wants a clause that would allow him to box at the same time along with a pay rise.

“I just did this. I took this fight for a personal reason, and because I want to make sure that regardless, even if it’s unfair.

“I have been wrongly treated, I can make my case to say I have completed the eight fights. But no.

“We’ve been having this (boxing) discussion for a year, and it seems like they were OK with it.

“Whatever you’re doing, whatever the event is, whether it’s boxing, when the UFC is involved, it’s just going to make it bigger.

“That’s not questionable. So yes, if I want to box, I would like the UFC to be involved.”