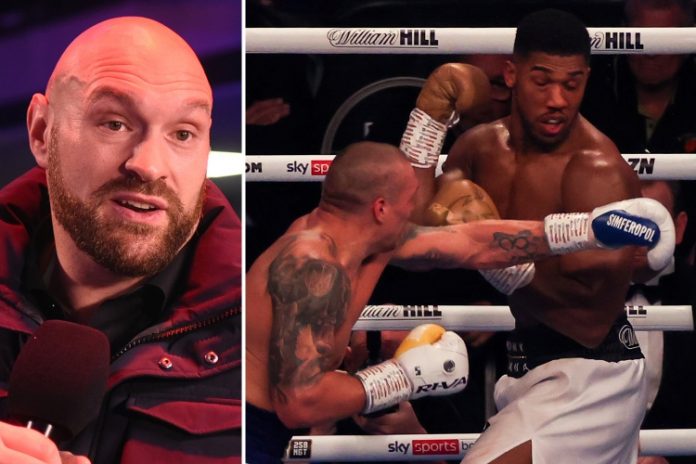 TYSON FURY says Anthony Joshua will be KNOCKED OUT in his rematch against Oleksandr Usyk later this year.

AJ, 32, will go to war again with the unbeaten Ukrainian in April as he bids to become a three-time heavyweight champion.

The Watford native was comprehensively outpointed by Usyk, 34, in September as he was outclassed at the Tottenham Hotspur Stadium.

Del Boy even backed Joshua to beat Fury should the pair ever come to blows, as he heaped praise on his punching power.

“If AJ fights Fury, he has to go on him straight away, blast him out. He can’t box him. If he boxes with him, he loses. If you give Fury time on the ball then you’re in trouble.”

The Gypsy King was quick to fire back, as he declared that if Deontay Wilder or Wladimir Klitschko couldn’t stop him, then Joshua has no chance.

Taking to social media, he remarked: “This is a message to Derek Chisora, I’ve just seen that you said you think AJ would blast me out. Never in a million years.

“So Del, he ain’t got the bottle to fight Usyk again. Usyk will smash him next time, properly.

“Never mind beat him on points, he’ll knock him out. But listen, it only takes one man like me.

“There’s only ever been one man on these shores, and he’s called the Gypsy King, AKA Tyson Fury.”

WBC king Fury is targeting a return to the ring on March 26 following his epic win over Wilder in their trilogy encounter.

But they later confirmed the percentage of any purse split would be 80 per cent in the champion’s favour.

Whyte has since protested against the decision and is appealing it, pushing back the dates of the purse bids.

Fury’s US-based promoter Bob Arum has urged Whyte to ‘quit screwing around’ and agree a fight deal with the Manchester United fan.