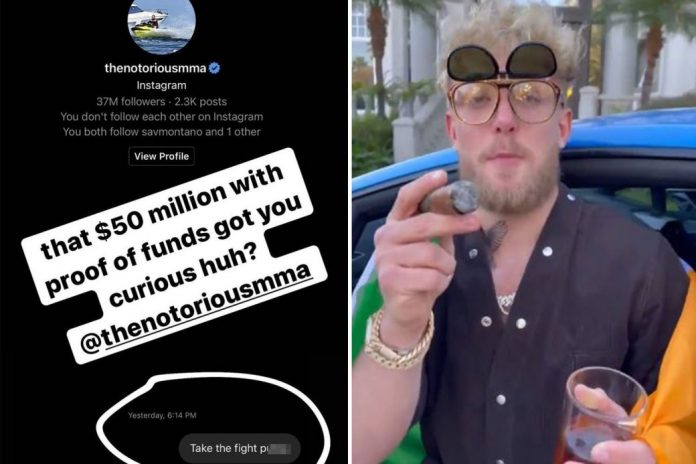 JAKE PAUL continued his relentless pursuit of a boxing match with Conor McGregor by direct messaging the UFC superstar on Instagram.

The YouTuber revealed his eagerness to take on McGregor a few days after scoring a sensational second-round KO victory over Nate Robinson on the undercard of Mike Tyson’s exhibition bout with Roy Jones Jr late last year.

And last July, the 24-year-old doubled down on his desire to box McGregor in a foul-mouthed tirade on Instagram, in which he claimed his team have sent the UFC’s poster boy a whopping £37million ($50million) offer.

McGregor refrained from responding to the x-rated call-out, in which Paul made derogatory comments about the Irishman’s fiancee, Dee Devlin.

And in another attempt to get the former two-division UFC champion’s attention Paul – whose older brother Logan stepped in the ring with Floyd Mayweather – sent a short and sweet direct message to The Notorious on Instagram.

After sharing his DM to McGregor, Paul launched a blistering rant at UFC president Dana White, who revealed he was willing to let women’s bantamweight and featherweight queen Amanda Nunes fight the former Disney star.

He said: “Alright, Dana, let me try to understand your logic here: So you’re saying you don’t want me to fight Conor McGregor because he’s one of the greatest fighters in the world and I’m just like a YouTuber of whatever.

“But then, in a statement today, you say: ‘Oh, I’m thinking about just having Amanda Nunes knock him out.’ But she’s also one of the greatest.

“Dana, you seem to have this thing where you sort of hate on videogamers or YouTubers and influencers and us boxing and all this stuff.

“But then, you spend half your time hanging out with the Nelk Boys. And I know why. It’s because they have hella influence over the male audience and you know that’s gonna promote the UFC.

“And right now, baby, there’s nobody in this f***ing world who is promoting the UFC as much as me.

“Dana, I know the world doesn’t really know this because the UFC is this huge company. But we all know it’s not doing that well.

“Anyone who is involved in WME and all the public stocks and everything that went south there, we know the company is not doing well. And I’m the biggest money fight you can do unless Khabib comes out of retirement.

“So if you want the UFC to make the most amount of money, you better start to wake the f**k up and realise that Jake Paul vs Conor McGregor is going to happen at some point.”

Paul’s rant at White came shortly after he ambushed McGregor’s team-mate Dillon Danis and pelted him with water balloons.

Paul may very well be a combat sports novice, but he’s well and truly at the centre of the boxing and MMA worlds at this moment in time.

Deontay Wilder ‘in contention’ to fight for...