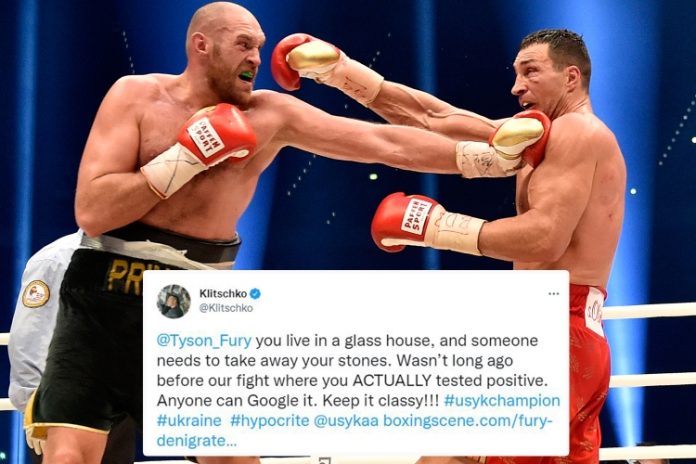 Fury made the outrageous claims about Usyk and insulted Anthony Joshua on social media while running on a treadmill.

He said: “You know what I can’t believe?

“That AJ has gone and given Ukraine all the heavyweight belts back after all my hard work of relieving them. You big, useless dosser.

“You’ve let a little steroid man come up from middleweight and set about you, and take all your belts.

“But it’s gonna have to take a real British Lancaster bomber like me to go and relieve the useless little sted head of the belts and get them back to Britain.

“I’ll put them in their place, relieve them of the belts again.”

Ukrainian Usyk, 34, who defeated Joshua, 32, in September to win the aforementioned titles, has not yet responded to the allegations.

But his countryman Klitschko, beaten by Fury in 2015, did and reminded the Gypsy King of his ‘adverse finding’ with United Kingdom Anti Doping Agency.

Klitschko, 45, tweeted: “You live in a glass house, and someone needs to take away your stones.

“Wasn’t long ago before our fight where you ACTUALLY tested positive. Anyone can Google it. Keep it classy!!!”

In 2016, UKAD suspended Fury after he and cousin Hughie returned samples with elevated levels of nandrolone metabolites following respective fights in February 2015.

They both denied knowingly taking a banned substance and blamed the adverse finding on boar meat.

But the newly-crowned heavyweight champion by that time had already pulled out of his rematch with Klitschko due to an ankle injury.

Fury remained suspended until 2017 and vacated his titles after falling into depression and fighting drink and substance abuse.

Eventually, he did make a return in 2018, and served a backdated suspension to the point of the adverse findings, meaning he was free to fight again that summer.

The titles Fury won against Klitschko in Dusseldorf, Germany, are currently around the waist of Usyk, following his win over AJ.

But the unbeaten Brit does own the WBC strap – and boasted of the prior belts he took from Klitschko in that famous upset.

Fury, 33, said in a Twitter video: “Wladimir, you’ve got some cheek to come back after all these years and open your big mouth.

“You never landed a punch, I took all your belts of ya. Look, these used to belong to you mush, now they belong to me.

Tyson Fury and Wladimir Klitschko in Twitter spat after Ukrainian slams him as ‘hypocrite’ over Usyk ‘steroids’ jibe (thesun.co.uk)