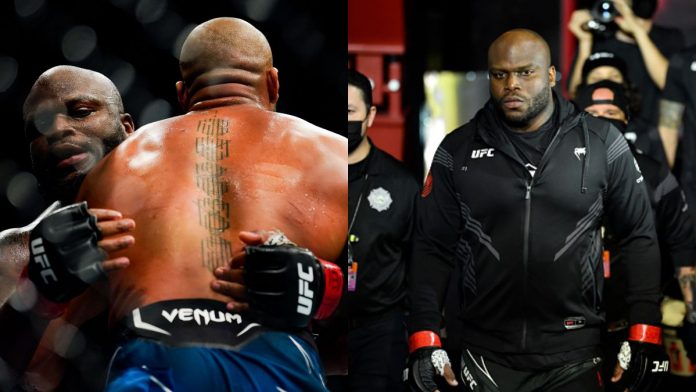 Derrick Lewis: Gane Fight Would’ve Been Different if It Wasn’t In Houston

UFC heavyweight contender Derrick Lewis believes his convincing defeat to Ciryl Gane at UFC 265 would have played out differently had it not been in Houston.

Having built a four-fight win streak, Lewis secured his number one contender spot at the start of 2021 and was expected to challenge for Francis Ngannou‘s title in the third quarter of the year. While victories over Blagoy Ivanov, Ilir Latifi, and Alexei Oleinik brought him back to contention, it was the brutal knockout of Curtis Blaydes at UFC Vegas 19 that cemented his second title shot in the UFC.

After Ngannou couldn’t make the UFC 265 date in August, the promotion’s desire to have Lewis headline in Houston saw the creation of interim gold. The veteran KO artist challenged for it against unbeaten Frenchman Gane.

While many dreamt of a hometown finish for Lewis, “Bon Gamin” spoiled the party with a stoppage of his own. After perfectly executing the art of hit and don’t be hit and dominating for the best part of two-and-a-half rounds, Gane had the interim title wrapped around his waist following a third-frame TKO.

Lewis: “I Felt Embarrassed To Fight”

Despite the immense disappointment of falling short of title glory for the second time in the UFC, Lewis was quick to bounce back. Just four months later, “The Black Beast” closed out the year in style. In the final main event of 2021, he brutally knocked out rising contender Chris Daukaus inside the opening round. In doing so, he broke the record for the most KOs in UFC history, with Daukaus becoming his 13th victim.

In the aftermath of his rebound victory, Lewis discussed his back and forth year during an appearance on Ariel Helwani’s The MMA Hour. During the interaction, the #3-ranked heavyweight contender looked back on his loss to Gane and suggested there were multiple things he should have done differently inside the Toyota Center.

“I felt embarrassed to fight, that’s all it was. It felt embarrassing, it felt like I should have done a lot more than I did, and just, I was gun-shy the whole fight. I didn’t wanna pull the trigger, and I was too stationary. It’s a lot of stuff, I could go on and on about a lot of things that I should have did different in that fight.”

When asked whether the pressure of fighting in Houston played a part, Lewis suggested he and his coaches believe the result would have been a lot different had the event been held elsewhere.

Having experienced pressure and expectation like never before at UFC 265, Lewis knows what he wants for the rest of his career: fun and pressure-free fights. That’s exactly what he has lined up for next month.

At UFC 271, “The Black Beast” will face fellow KO artist Tai Tuivasa. With both men providing some of the most hilarious and entertaining moments in the Octagon and “Bam Bam” describing them as the “fun of the division,” this one certainly fulfills the criteria for Lewis.

Derrick Lewis: Gane Fight Would’ve Been Different if It Wasn’t In Houston (mmanews.com)