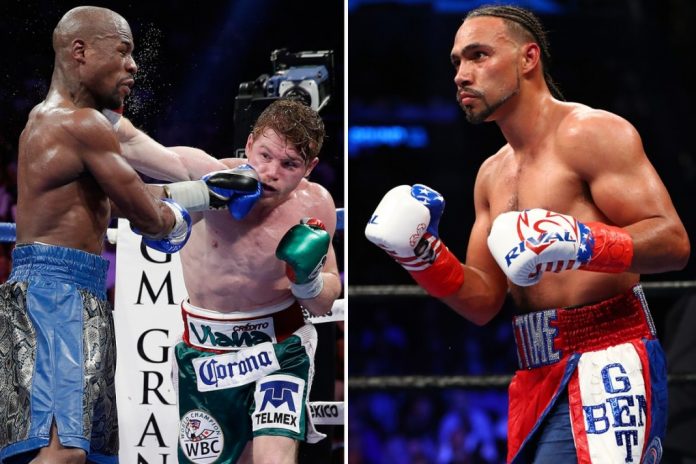 KEITH THURMAN said Canelo Alvarez ‘learned from the best’ in Floyd Mayweather on how to pick the right opponents.

And now having inherited Mayweather’s spot as boxing’s top attraction, Canelo is ‘starting to make money’ like his former opponent.

“He has a huge following. He’s brought tons of excitement. You can say he’s cherry-picked a little bit but he kinda learned from the best.

“He got beat by Floyd and now he’s starting to make money like Floyd.”

Since then, the Mexican has become a champion in FOUR weights, most recently undisputed at super-middleweight.

But he eyed a title in his fifth weight after having a request accepted by the WBC to challenge cruiserweight champion Ilunga Makabu, 34.

It would mean jumping two divisions and fighting over TWO STONE his natural weight.

Thurman, 33, said: “Are there greater challengers for Canelo Alvarez? Most definitely.

“Are there fights that I would truly love to see? Most definitely. Are there super talented individuals that might be able to give him problems? Definitely.

“Does he have to do any of those things? Absolutely not.”

Thurman has not fought since losing to now-retired Manny Pacquiao, 43, in 2019.

But his comeback fight is against Mario Barrios, 26, on February 5 in Las Vegas.

Canelo Alvarez ‘starting to make money’ like Floyd Mayweather after he ‘learned from the best’ in picking opponents (thesun.co.uk)