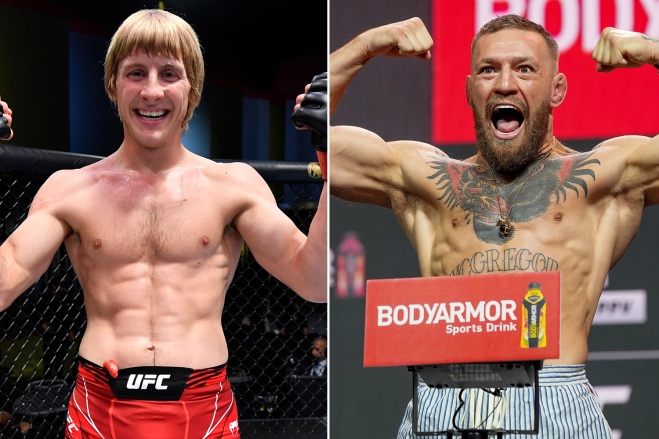 The former Cage Warriors featherweight champion made a spectacular debut in the stacked lightweight division in September, registering a stunning first-round KO victory over Luigi Vendramini.

Slick Scouse submission specialist Pimblett is adamant he’ll go all the way to the top and foresees a record-breaking pay-per-view fight with McGregor in his future.

When questioned about the timeline for his goals, he told ESPN: “Yeah, besides him because he has the name.

“I know for a fact if I fought him it would be the most box offices sold ever. Without a shadow of a doubt.

Despite only having one fight in the UFC to his name, Pimblett isn’t short of confidence.

When pressed on how he could potentially land a fight with McGregor and fulfil his goals, he said: “Cause I’m The Baddy.

“I’ve got a little saying. ‘Everyone loves The Baddy.’ Everyone lad, it’s boss. It’s a great feeling.

“Obviously, you get a few haters and trolls and idiots online on my YouTube and my Insta.

Pimblett also has ambitions of bringing the UFC back to Liverpool for a sold-out show at Anfield, although he doesn’t foresee that happening for at least another two years.

“I’m going to win three fights in 22 and then I can start demanding it when I’m 4-0 in the UFC and I’m working towards a ranking.

“But they’re not going to give me it until I’m in the top ten or it’s like a No 1 contender fight or something.”

SunSport understands new fan favourite Pimblett will make his second walk to the octagon on March 19, although he’s yet to land an opponent.

McGregor, meanwhile, is eyeing an April return to sparring as he continues to recover from the horrific broken leg he suffered in his trilogy fight with Dustin Poirier last July.

And UFC supremo Dana White expects the Irishman to return to the octagon in the summer.

He told ESPN: “If everything goes right with the timing of his healing, he should be back this summer.”