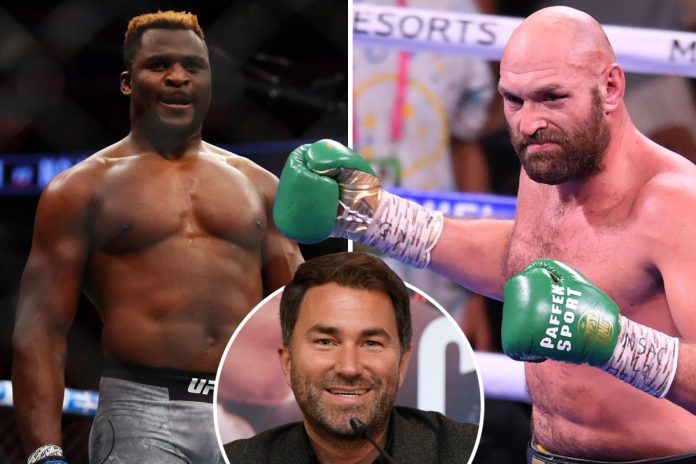 The Matchroom boss would much rather match the 33-year-old WBC king against mandatory challenger Dillian Whyte or former unified champ Anthony Joshua.

But the Gypsy King has been having fun calling out the Cameroon knockout sensation on Twitter instead.

The 6ft 9in undefeated superstar has offered to fight The Predator under boxing rules but with the UFC’s dangerous 4oz gloves.

And Ngannou replied with an invite into the octagon with the standard boxing gloves instead.

Hearn would much rather Fury handled the serious business of negotiating a deal to face Whyte but is enjoying the show.

“I think it’s nonsense but it’s all good,” he said after launching his and DAZN’s stacked start to 2022.

“Anything that gets people talking is good.

“It is quite exciting to think of the prospect of Tyson Fury fighting Francis Ngannou in a ring or in a cage, wherever. But I don’t see it happening any time soon.

“Anything like that drives fan engagement, which is good, it’s good for Tyson and Francis Ngannou, boxing and the UFC.

“Anything that gets people talking is good news.”

Whyte is furious that the WBC have ordered him to accept just 20 per cent of the purse for his potential fight with Fury, especially as he is their interim champion.

Hearn expects Tuesday’s purse bids to be pushed back to help all parties come to an agreement and he confirms the always bullish Whyte – who has been the sanctioning body’s No1 contender since 2017 – has been drained by the frustration.

He said: “We swapped a couple of messages earlier this week and Dillian is not the type to accept anything that is not fair.

“I would be tired as well, if I was Dillian Whyte, but I think his team has done a good job of shielding him from a lot of it.