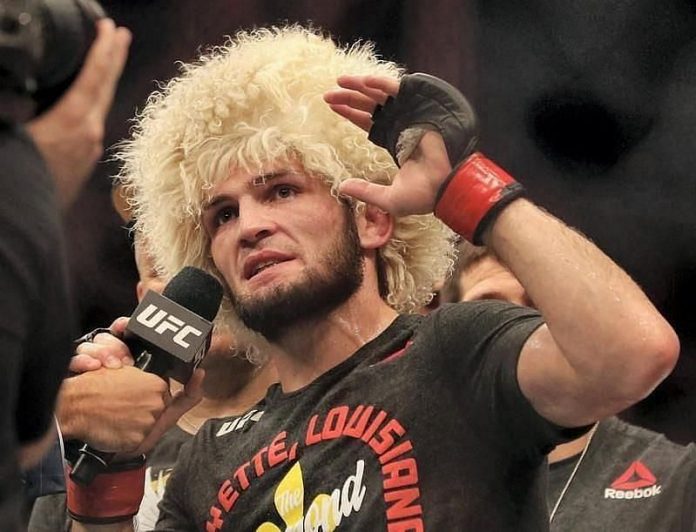 The UFC Is Pushing Chimaev To Draw Khabib Back

Not many fighters have burst onto the scene quicker than Chimaev, yet alone twice in two years. In 2020, “Borz” established his name with consecutive victories over John Phillips and Rhys McKee in the space of just 10 days, marking a modern UFC record.

In his US debut a few months later, Chimaev showed his mettle at middleweight by knocking out divisional veteran Gerald Meerschaert. The fact he was booked to face elite contender Leon Edwards soon after his three unranked wins showed just how high the UFC was on the Chechen-born Swede.

But after a tough battle with COVID-19, which almost saw him retire from the sport, Chimaev’s rise was put on hold. His battle with the virus left him on the sidelines for over a year. When he returned, he immediately brought back the hype he accumulated the year before.

Against ranked opponent Li Jingliang at UFC 267, Chimaev secured his place on the welterweight ladder and even jumped into title contention in the eyes of many by brutally choking out “The Leech.”

One man who hasn’t been impressed with Khamzat Chimaev is former interim lightweight title challenger Kevin Lee. The 29-year-old revealed he’s yet to board the rising star’s hype train because he hasn’t seen him do anything worthy of it.

“The Motown Phenom” recently signed for Khabib Nurmagomedov’s Eagle FC following his release from the UFC. He’s now suggested his former promotion’s desire to bring his new boss back to the Octagon has led to Chimaev’s push.

During an appearance on The Schmozone podcast, Lee suggested Dana White and the promotion are trying to play on Khabib’s ego by attempting to build another Dagestani brute to greater heights in the sport, something he believes could draw “The Eagle” back for more.

“The Khamzat push, I think is to kind of make up for the gap that Khabib had. I think if they feel like he can get bigger than Khabib, they may be able to play with Khabib’s ego a little bit. As humble as Khabib wants to say he is, he’s got an ego, too. I think if somebody is to be looked at as above him in his own community, then maybe he might make that comeback, and then they’ll make a whole lot of money off him. I think that’s probably the push.”

Khabib is widely regarded as one of, if not the, greatest of all time. The 33-year-old built an incredible unblemished 29-0 record across his illustrious career, a résumé that includes the names of Conor McGregor, Dustin Poirier, Rafael dos Anjos, Al Iaquinta, Edson Barboza, and Justin Gaethje.

Following his successful defense against “The Highlight” in 2020, Khabib announced his retirement, citing the promise he’d made to his mother after the tragic passing of his father. While he’s remained committed to his decision to hang up his gloves ever since, it seems unlikely the UFC will ever fully give up hope of a monumental return

Quote: The UFC Is Pushing Chimaev To Draw Khabib Back (mmanews.com)