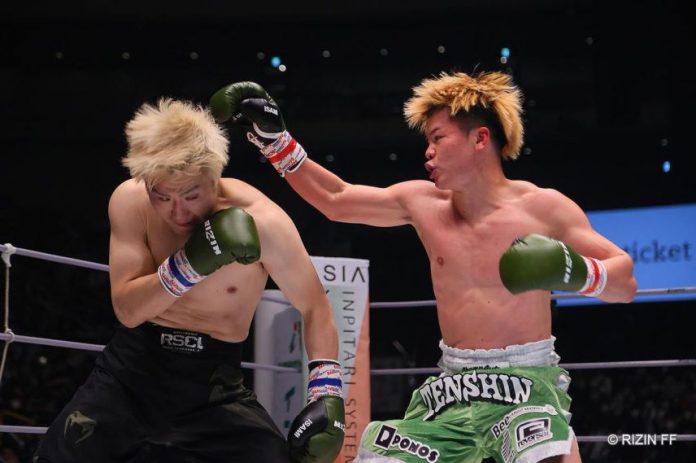 As he prepares for an eventual move into boxing full time, 23-year-old phenom Tenshin Nasukawa engaged in a two-round special attraction with MMA legend Takanori Gomi that ended in a draw at RIZIN 33 in Japan on Friday.

Nasukawa, who famously took on Floyd Mayweather in an exhibition boxing match back in 2018, has been one of RIZIN’s biggest stars in recent years but his time with the promotion is starting to wind down as he gets ready to focus more on the sweet science moving into 2022 and beyond. Of course, Nasukawa still has a rivalry showdown against K-1 champion Takeru Segawa planned for next year but he started his goodbyes to RIZIN after sharing the ring with Gomi on New Year’s Eve.

Using a significant speed advantage, Nasukawa was quick to set the tone against Gomi in the opening round as he peppered the former PRIDE champion with sharp, accurate combinations that went to both the head and the body.

Despite giving up size and weight to Gomi in the fight, Nasukawa was not afraid to engage as he continued to attack while also staying out of the way of the looping punches coming back at him.

The second round saw Gomi stage a comeback as he started to connect with some stiff shots of his own including a rapid-fire combination that clipped Nasukawa hard during one exchange. Nasukawa fired back but Gomi was definitely holding his own until the special exhibition bout came to an end.

After two rounds and both athletes still standing, the fight was declared a draw.

In the finals of the RIZIN bantamweight grand prix, former Ultimate Fighter veteran Hiromasa Ougikubo exacted his revenge against Kai Asakura with a strong showing after picking up a win over UFC veteran Naoki Inoue earlier in the night.

While Asakura ended the first fight with a brutal knee followed by soccer kicks, Ougikubo had him well scouted for the rematch as he turned to his wrestling and ground game to stifle his opponent’s striking attacks.

After mounting him in the opening round, Ougikubo continued to use the threat of takedowns to keep Asakura off balance while also mixing in some solid striking of his own. The varied attacks from Ougikubo prevented Asakura from really opening up his offense and that continued to play a major factor throughout the fight.

A big slam followed by knees and punches towards the end of the fight helped Ougikubo secure the victory as he earned a unanimous decision win over Asakura to complete his run through the RIZIN bantamweight grand prix.

RIZIN lightweight champion Roberto “Satoshi” de Souza also defend his title with an impressive showing against Yusuke Yachi after he latched onto a triangle choke-armbar combination to get the finish in the second round.

Souza’s ground dominance was the difference in this fight as he kept threatening Yachi with his grappling, making fluid transitions to improve his position and then setting up various submission attempts. Just when it looked like Yachi might escape one particular exchange on the canvas, Souza made him pay after catching him with the triangle-armbar that earned the tap to end the fight.

Souza now sits at 13-1 in his career and he declared afterwards that he wanted to win a second title while throwing down an open challenge to a Bellator champion to face him next.

Here are the full results from RIZIN 33 in Japan on Friday:

The Best Fighters of Europe