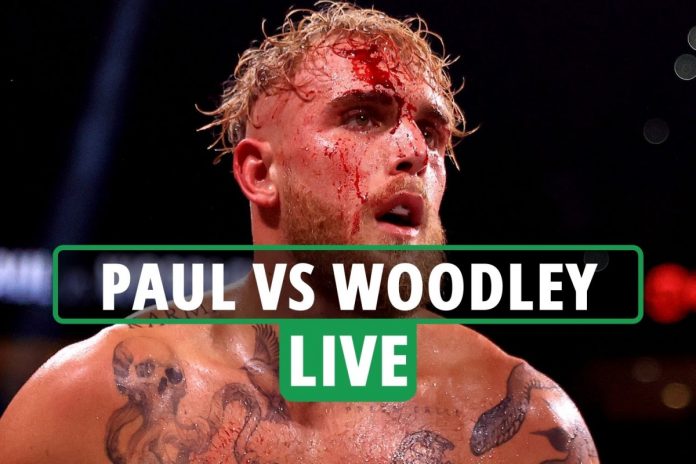 JAKE PAUL knocked out Tyron Woodley with a SENSATIONAL one-punch KO in the sixth round.

Paul was cut and bleed heavily before he connected to secure a brutal triumph.

Ex-MMA fighter Woodley had stepped in after Tommy Fury pulled out of the fight with injury.

And Paul was quick to call out UFC’s Jorge Masvidal AND Nate Diaz who were in attendance in Tampa.

The undercard featured an NBA vs NFL match-up between Deron Williams and Frank Gore, and Amanda Serrano will set up a huge fight with Katie Taylor next year after her win.

Tommy Fury has questioned Jake Paul’s decision to call out multiple UFC stars, including Jorge Masvidal, after beating Tyron Woodley at the weekend.

He told Dev Sahni on The Unibet Lowdown”To hear him after the fight calling out all these MMA people.

“I don’t get what he is trying to achieve with these UFC people. He wants to be a boxer, doesn’t he? So fight a boxer.

“Stop calling out all these wrestlers and non-boxers.

“I think he is very lucky that it wasn’t me in there instead of Tyron Woodley. I am trying to give him a bit more credit, but I just can’t.

“People who come out and don’t do anything against me get put to sleep.”

More from Fury on Paul

Tommy Fury was also asked on whether he believed Jake Paul had improved from his last fight.

To which he emphatically responded: “No. Honest truth he looked better in his last fight.

“This fight he didn’t do anything. For the first five rounds it was a hugging affair. He didn’t show me anything.

“He doesn’t move his head. The only way you get better is the amount of ring time you have. He’s got to learn that.

“I think he was lucky it wasn’t me in there instead of Tyrone. I try to give him more credit but I can’t.”

Tommy Fury has spoken for the first time since Jake Paul knocked out Tyron Woodley in Florida at the weekend.

Woodley stepped in at short notice to fight Paul, after Fury withdrew due to illness and injury.

“They were joking who won that round and it was nobody. It went on for multiple rounds.

“I was watching and it was upsetting for me to watch because I know if I’d have been in there it wouldn’t have been going six or seven rounds.

“That was meant to be my night. The people who know me know how much of a bitter pill that was.”

Jake Paul fancies ANOTHER sequel with Tyron Woodley – but on the silver screen.

After completing his second win in the boxing ring over the UFC icon, YouTuber Paul hopes they make a ‘Buddy-Cop movie together’.

And he said: “People are saying we should do a podcast together.

“I think it would be funny to do a Buddy-Cop movie together. So, our relationship doesn’t end here.”

Memes the word for Tyron

Tyron Woodley has encouraged fans to create good memes about him after his loss to Jake Paul on Saturday night.

The Chosen One wrote on Instagram: “They thought a lesson would make me quit. That s*** made me laugh. I been here before. #BounceBack #Elastic

But y’all real funny wit the memes. some of that s*** i gotta laugh at myself. People talented at photoshop and editing. Might as well get paid for it.

Here you go. 5 Bands to the funniest video/pic. Rules below:

1) Must Use Multi layered post
2) First slide your meme/Second slide must show you following me
3) Yeah i’m not giving you 5 bands to let you drill me and not follow me FOH. Tag me so i see it.
4) Promise to do good with some of it