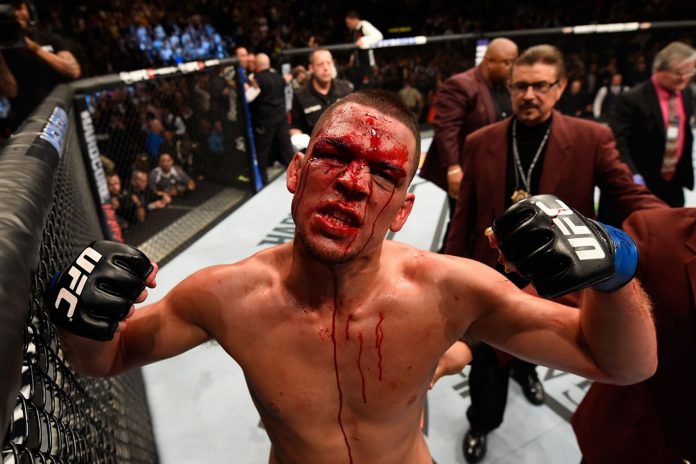 Over the weekend Nate Diaz attended the Jake Paul vs. Tyron Woodley 2 fight … not as a spectator but as a cornerman for Chris Avila who was fighting on the undercard.

At some point in the night, Diaz was caught on camera hilariously punking a random guy in the crowd. You can see Diaz walking by the man before pretending to throw a punch and the man absolutely murking his beer in response.

Now that random man has come forward to tell his side of the story.

The beer slinger in question is actually a fighter himself. The MMA and bare-knuckle fighter Carrese Archer took to Instagram to call out Diaz for scaring him and to UFC president Dana White for sharing the video and laughing at him.

“Hello, world. I seen all the laughter, everybody laughing, haha. Same thing that make you laugh make you cry,” Archer said in the video (h/t MMA Junkie). “Nate Diaz is a bona fide female dog. He had the police with him, had the security protecting him, and you gonna flinch at me and try to sucker punch me when I’m not paying attention? And y’all think this man is a gangster? I think the world is f*cked up and confused around here when they think about what is a real gangster. I’m a real street dog. I’m in the streets. Believe that. Anybody that know me know how ‘One Punch’ rockin’, and we don’t do sh*t while the police there.”

He continued on saying, “Dana White, I seen you made a post. And you laughed, and you thought it was funny. I bet you won’t think it’s funny you sign me for one fight, and I knock Nate Diaz the f*ck out in the first round. Guaranteed, no cap, I’m not playing no games.”

Archer appears to train at the same gym as Avila’s opponent, Anthony “Pretty Boy” Taylor who Avila defeated on Saturday.