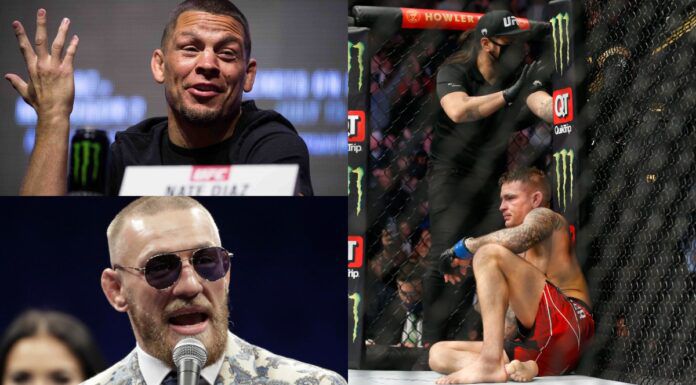 Nate Diaz and Conor McGregor both had something to say about Dustin Poirier‘s loss to Charles Oliveira at UFC 269.

In last night’s UFC 269 main event, Dustin Poirier and champion Charles Oliveira went to war to solidify who was the best lightweight in the world. It was Oliveira who had his hand raised in the end to log his first successful title defense. Poirier was gracious and classy in defeat, but grace was not something extended to the Louisianian by two familiar faces to him, Nate Diaz and Conor McGregor.

First, Diaz took an indirect shot at nemesis Conor McGregor in his reaction to the outcome of the UFC 269 main event.

“How Conor let Dp fuck him up hella times he sucks”

It’s up for interpretation if the “he” is in reference to McGregor or Poirier, but judging by the overall context, it would seem the insult could apply equally to either gentleman.

Poirier had more pressing issues to deal with at the moment than what Nate Diaz had to say about him, but McGregor continues to have plenty of time to fire back at his rival while also launching an indirect shot at Poirier in this instance.

“you lanky string of piss he got lumped around and got lucky twice. That’s it. Is what it is. Embarrassing night for him alright. That closed guard game. Wtf was that. Wow! Shocking. All good happy Sat night horse yupya it’s proper twelve day tomorrow 12/12. New Paddy’s Day!,” McGregor said in response to Diaz.

Nate Diaz and Dustin Poirier have been linked together in the past. The two were supposed to fight at UFC 230 in 2018, but that fight fell apart, with both fighters pointing the finger at the other as far as who was to blame for the collapse.

Conor McGregor and Dustin Poirier have fought three times, with Poirier getting the better of McGregor twice, as Diaz alluded to in his tweet. The last time Poirier and McGregor competed against one another was at UFC 264. At the close of this trilogy bout, McGregor suffered a gruesome leg injury that resulted in a Poirier TKO victory via doctor’s stoppage.

What do you make of these remarks from Nate Diaz and Conor McGregor about Dustin Poirier’s UFC 269 loss?