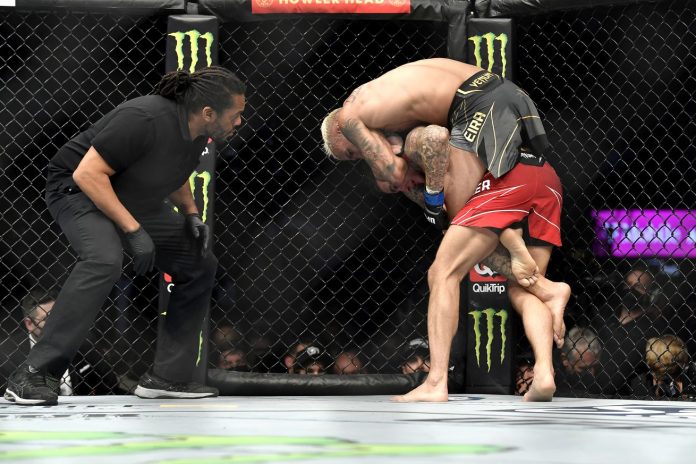 Charles Oliveira silenced a lot of doubters with his win in the UFC 269 main event.

Facing an opponent in Dustin Poirier, who many were calling the uncrowned lightweight champion, it was “Do Bronx” who survived a tough opening round and then stormed back with a punishing performance until wrapping up a standing rear-naked choke submission to finish the fight at 1:02 into the third round.

It was an awe-inspiring showcase from Oliveira, who retained the 155-pound title in his first defense while dispatching a legend in Poirier.

“I’m a world champion. I’m the man,” Oliveira shouted after securing his 10th consecutive win overall. “They talk, I do it. They can hit me a lot but I’m going to walk forward.”

It was a jaw-dropping fight from start to finish with Oliveira once again dispelling the reputation that he bows out when facing adversity in the cage. That couldn’t have been further from the truth on Saturday night after he survived punches from Poirier that have knocked out a number of top ranked lightweights over the years.

With that devastating power on full display, Poirier charged out of the gates as he tagged Oliveira with a series of stinging punches in the opening round that put the champion on his heels. Poirier was relentless with a series of left-right combinations straight down the middle that continued to catch Oliveira on the chin.

In return, Oliveira just kept moving forward to close the distance while landing several hard knees to the body and also managing to snap Poirier’s head back with some nasty punches of his own. Every time Oliveira started to build momentum, Poirier would fire back with blistering strikes that continuously blasted the Brazilian on the jaw.

It was a fire fight throughout the opening round with Poirier landed the bigger and better shots but Oliveira wasn’t going away.

A takedown during a scramble ended with Oliveira on top and that’s where he started unloading some really brutal elbows that were just hammering away at Poirier, who was stuck playing defense on the bottom. Oliveira was patient but he was still delivering those same nasty strikes again and again with Poirier just holding on with his guard.

As the third round got started, Oliveira saw his path to victory as he once again got on the inside to grab onto the body lock in order to drag Poirier back into his world on the ground.

This time, however, Oliveira managed to move all the way around to jump onto Poirier’s back, which is one of his favorite positions in the octagon. As soon as Oliveira got his legs locked, he began fishing for the rear-naked choke with Poirier trying everything to break free of his grasp.

With the most submissions in UFC history isn’t no mystery how Oliveira managed to find the opening to slip his arm under the chin as he locked up the choke and the grimace on Poirier’s face told the story how his night went from bad to worse in a matter of seconds.

Finally when Poirier saw no escape, he tapped out to stop the fight as Oliveira began to celebrate his victory.

Following the fight, Poirier paid homage to Oliveira while also pledging to make a donation to the charity of his choice as champion and challenger embraced in the cage.

As for the loss, Poirier offered up no excuses other than getting away from his own game plan and Oliveira making him pay for it.

“I landed some good clean shots on him,” Poirier said about his performance. “I thought it was going to get him away in the first round. He’s a champ. I brawled again when I wasn’t supposed to.”

Heading into the night, Oliveira almost seemed as if he was the unlikely contender facing a dominant champion but he had no intention of surrendering his title without a war— and that’s exactly what he brought to Poirier on Saturday night.

Now Oliveira has defined himself as the best in the world in arguably the deepest division in the sport. With the win he’s likely staring at a showdown with Justin Gaethje next, but for tonight Oliveira has more than earned the right to enjoy his well-deserved victory at UFC 269.