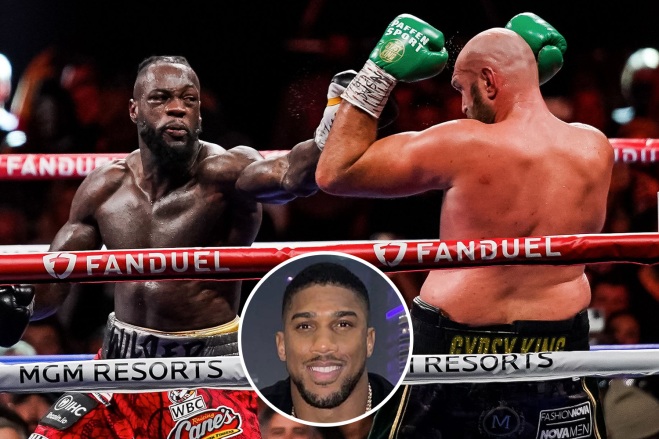 ANTHONY JOSHUA reckons Deontay Wilder was destined to fail with his jab-heavy approach for his trilogy fight with Tyson Fury.

The Bronze Bomber stunned boxing fans across the world by repeatedly jabbing Fury to the body in their epic series decider last month.

But fatigue eventually scuppered the American’s more measured approach to try and KO the Gypsy King.

Joshua was among those surprised to see Wilder repeatedly make use of the jab, which he believes modern heavyweights struggle to utilise for 12 straight rounds.

During a JD Sports round table, he said: “Not in this day and age [can heavyweights jab for 12 rounds] because heavyweights are different.

“I met the guy who makes gloves the other day, and he said that they never used to have to make special gloves.

“But now heavyweights are 17 to 19 stone and six-foot ten.

“The whole division is changed in the last, like, five years.

“And before, fighters could jab like that for 12 rounds and get away with it.

“They’d get a bit tired, but they were conditioned because they were lighter.

“But now, when you’ve got big guys [who are] six-foot-seven, they get tired.”

Joshua, 32, was impressed by Wilder’s early attempts to switch up his game plan.

But he believes the former WBC heavyweight champion lacked the mental strength to see the job through.

AJ said: “He tried, but to get that power and that ferociousness, you have to have it up here [points to his head].

“Before you have it just here [clenches fists] at that level, you have to have it here [points to his head] as well.”

Joshua is currently gearing up for a rematch with Oleksandr Usyk, who ended his second reign as unified heavyweight champion in September.

And the Watford warrior plans to throw caution to the wind in the crunch clash by adopting the same approach he used in his 2017 classic with Wladimir Klitschko.

He said: “I’m gonna bring that energy back. But I’m not gonna go into my training and all that.”