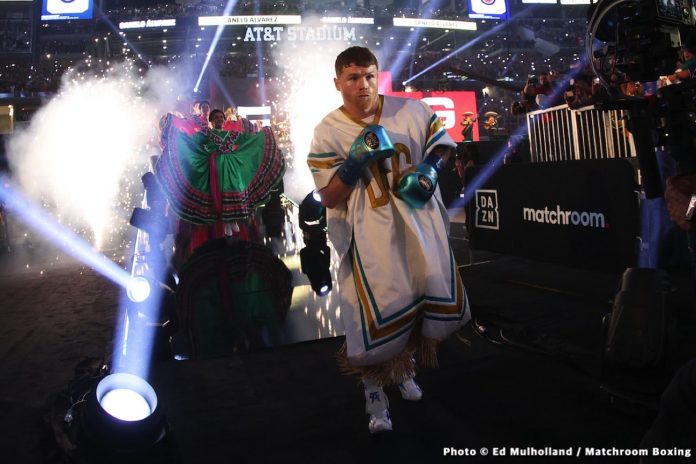 Eddie Hearn Wanted Canelo To Fight At 175 To Become Undisputed

By Allan Fox: Promoter Eddie Hearn was shocked this week to hear the news of Canelo Alvarez choosing to move up to cruiserweight to challenge WBC champion Ilunga Makabu for his next fight rather than going to 175 to become undisputed in that weight class.

Hearn says he liked the idea of Canelo (57-1-2, 39 KOs) trying to become the undisputed champion at light heavyweight, and he’s a bit surprised at hearing that he’s planning on facing the 34-year-old Makabu (28-2, 25 KOs).

It’s understandable why Hearn preferred that Canelo fight at 175, as he would have taken on the dangerous IBF/WBC light heavyweight champion Artur Beterbiev (16-0, 16 KOs) and WBA champion Dmitry Bivol (18-0, 11 KOs).

The question is, did Canelo lose his nerve? He might have gotten cold feet when he took a good look at what he would have been up against in facing the 175-lb champions Beterbiev, Bivol, and Joe Smith Jr. to try and become the undisputed champ in the light heavyweight division.

It’s a different story at 175. Those champions actually have talent, and they’re very, very dangerous. You can argue that the 175-lb champions Artur Beterbiev, Dmitry Bivol, and Joe Smith Jr. would have destroyed the four belt-holders from the 168-lb division that Canelo beat to become the undisputed champion.

Hearn promotes Bivol. Canelo fighting those two 175-lb champions would resonate more with the boxing public than seeing him go up to cruiserweight to face a little-known belt-holder in Makabu.

Beating Makabu will further Canelo’s goal of becoming a five-division world champion, but it won’t do much to increase his popularity. The casual fans have never heard of Makabu, so the fight is the equivalent of Canelo facing Avni Yildirim.

Ilunga Makabu Not A Household Name

Makabu’s name means as much to the casual boxing fans as Yildidrim, which is why this move by Canelo to pick off this unknown cruiserweight champion is a wacky idea. From a business perspective, Canelo is shooting himself in the foot because he’ll make less money fighting Makabu than he would other fighters, and his popularity won’t increase because casual boxing fans have never heard of the guy.

The hardcore boxing fans are obviously aware of Makabu, but they don’t view him as a great fighter, and he’s seen as the most beatable of the champions in the cruiserweight division.

Hearn obviously remembers Makabu for his fight with Tony Bellew in May 2016 in Liverpool. Bellew destroyed Makabu by a third round knockout in a fight that was never competitive.

To his credit, Makabu has come fully back from that defeat by winning his last nine fights, but he’s not faced any of the excellent cruiserweights in the division.

He won the WBC title against the untested Polish fighter Michal Cieslak in January 2020. In his only belt defense, Makabu defeated 41-year-old past his best Olanrewaju Durodola by a seventh round knockout last December.

Hearn Wanted Canelo To Fight At 175

“I think he could become undisputed at 175, and I like that plan. But there is also the cruiserweight division,” said Eddie Hearn to iFL TV about Canelo moving up to cruiserweight.

“I think it’s a dangerous fight,” Hearn said of Canelo moving up to fight Makabu. “Saul and Eddie are interested in making history. They’re not interested in having normal, boring fights.

“The Golovkin fight is a huge fight financially; a lot of people would want to see that fight.

“From our [Matchroom Boxing] point of view, we need to be really aggressive to bring Canelo back to DAZN,” said Hearn. “That comes by options [for Canelo]. We can do the Makabu fight, of course. We don’t represent Makabu.

“Someone else can do the Makabu fight. We’ve got [Dmitry] Bivol, and we, of course, represent Bivol. That’s a big fight at 175.

“I think he’s in a great position because he’s got all these people saying, ‘Right, how do we bring Saul to our platform?’

“That’s why his free agency works so well in this position, and the Makabu fight can land on any platform, I guess because he’s not aligned specifically to one [promoter], and he’s in a good position,” said Hearn.

The actual reason why Canelo is choosing to fight WBC cruiserweight champion Makabu may be that the Mexican star lacks the self-confidence needed to fight David Benavidez at 168 or move up to 175 to take on Beterbiev, Bivol, and Joe Smith Jr.

Canelo Has A Built-In Excuse If He Loses To Makabu

Let’s face it; there’s an excellent chance that Canelo loses to some if not all of those fighters because they’re talented and bigger than him. But by Canelo moving up to cruiserweight to take on Makabu, he’s arguably got an easier option.

Moreover, if Canelo fails to beat Makabu, he’s got a built-in excuse because he’s giving away a lot of size.

The reality is there will be less blowback for Canelo after losing to the cruiserweight Makabu than if he were to get beaten by Benavidez, Jermall Charlo, Bivol, Beterbiev, or Gennadiy Golovkin

With the WBC’s cruiserweight NEW weight limit dropping from 200 to 190 lbs starting in the next fight, it gives Canelo a massive advantage because Makabu will need to drain down an extra ten pounds from the standard 200 lbs that he’d previously had to weigh in for his fights to the new weight limit of 190 lbs.

“Makabu probably woke up this morning thinking, ‘What a touch.’ I don’t think it’s a given that fight happens next because I think he’s [Canelo] going to look at his options, but it’s an option, and I think people will watch it. I think it’s very exciting,” said Hearn.

It might be wishful thinking on Hearn’s part about Canelo possibly not fighting Makabu next. Canelo’s trainer/manager Eddy Reynoso wouldn’t have asked the World Boxing Council for approval for Alvarez to go up to cruiserweight to challenge WBC champion Makabu if they weren’t planning on doing that next.