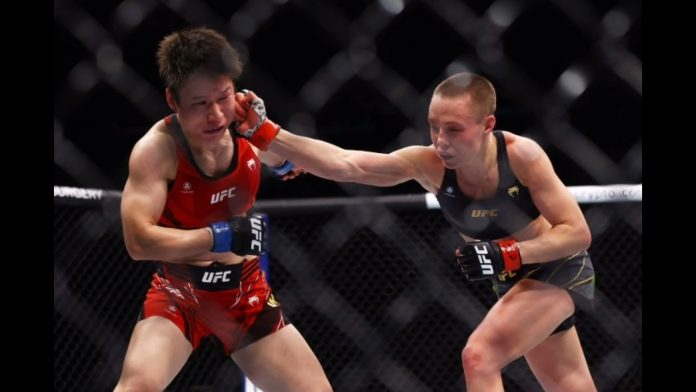 It was a much different fight the second time around but the result was still the same with Rose Namajunas leaving UFC 268 as the strawweight champion after defeating Zhang Weili.

It was an incredibly close fight over all five rounds with Zhang likely winning early and then Namajunas storming back late. When the final scorecards were tallied, the judges had it 49-46 and 48-47 for Namajunas with the third officials giving Zhang the fight 48-47.

In the end, Namajunas got the victory in a hard-fought battle.

“It was different,” Namajunas said about her win after knocking out Zhang in the first round in their previous encounter. “I was pretty confident in the end that I won it. The first couple rounds were pretty close. I wasn’t even too worried about the result, just doing my best.

“I had a feeling it was going to be a way tougher fight and she improved a lot. I know what I’ve got to work on now.”

Rather than trading strikes with Namajunas on the feet, Zhang took the fight to the ground following an early exchange but “Thug Rose” was undeterred as she eventually scrambled free. Neither fighter was willing to give an inch in the exchanges until the closing seconds of the opening round as Zhang and Namajunas just started trading punches until the horn sounded.

While Namajunas was like a sniper with her hands, Zhang was happy to counter by putting a whole lot of power behind her punches, which were coming in rapid-fire succession. Zhang then connected with a staggering left hand that put Namajunas on wobbly legs for a moment as she attempted to capitalize on the moment.

To her credit, Namajunas recovered quickly and then scored a takedown just before the second round ended.

Recognizing that Zhang was doing her best whenever she was able to close the distance, Namajunas started consciously staying at a distance to throw her combinations. That made it more difficult for Zhang to connect with power but any time Namajunas got a little wild with her punches, the former champion made her pay for it.

A stinging left hand from Zhang combined with a takedown late in the third round helped her regain control but Namajunas was still crisp and fast with her punches to never let any moment get away from her.

In a back-and-forth fight, Namajunas attempted to change the momentum in her favor by altering her game plan and looking to dominate on the ground. A reversal in round four and then a takedown in the final round kept Namajunas on top with Zhang stuck underneath her.

Namajunas was methodical with her ground strikes, doing just enough to stay in position while also ensuring that Zhang couldn’t escape out from the bottom. The constant pressure and the late grappling exchanges obviously helped Namajunas edge ahead on the scorecards as she defends her title for the first time in her second reign as champion.

With the result, Namajunas has now scored two wins over Zhang, which means former champion Carla Esparza is most likely next in line for a shot at the title, although no decision about that potential matchup will be made right away.