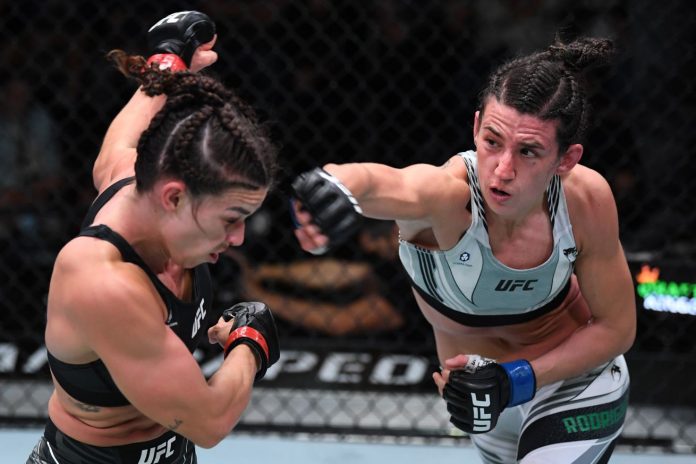 Marina Rodriguez blasts Joanna Jedrzejczyk for her inactivity, stumps for Carla Esparza to get next title shot

With a win over Mackzenzie Dern in the UFC Vegas 39 main event, Marina Rodriguez can now consider herself a title contender but when she might actually get a shot at the strawweight championship remains to be seen.

As impressive as her current run has been with three consecutive victories including dominant showcases against Dern and Michelle Waterson in headline fights, Rodriguez still has a logjam in front of her when it comes to the UFC rankings.

First and foremost is former champion Carla Esparza, who many believed should have earned the next shot at reigning champion Rose Namajunas after she rattled off five straight wins including a split decision over Rodriguez. Despite that resume, she was still passed over so former champion Zhang Weili could get an immediate rematch with Namajunas after she was knocked out in just 88 seconds in their previous meeting.

Even Rodriguez was stumping for Esparza to get the title shot with hopes that a win could potentially set up a rematch between them with the strawweight championship on the line.

“That’s the thing, I really think that Carla was the one that should have been getting the title fight now and not [Zhang Weili],” Rodriguez said at the UFC Vegas 39 post-fight press conference. “But if the UFC does offer me a title fight ahead of her, who am I to say no to it?

“But I would much prefer to let her go fight for a title, maybe get that belt and then we can do the rematch for the belt. I don’t have all the time in the world so she’s got to get moving.”

As she looks ahead at potential competition, Rodriguez only has a couple of options that wouldn’t have her fighting an opponent with a lower ranking in the division.

One intriguing option would seem to be former strawweight champion Joanna Jedrzejczyk, who hasn’t actually competed since she lost a razor-close split decision to Zhang back in March 2020.

“The problem is she’s holding a very important spot in the rankings and there’s so many girls there fighting twice a year, three times a year, trying to get to that and that spot is locked. If it’s not her, [Yan Xioanan] would be a good fight, she’s ahead anyways so that’s how I have to keep moving. Just keep moving forward and if the title fight happens and they want to defend quickly, give it to Carla after that. Maybe I can fight again, cool. If not, just give me someone else and we’ll keep on moving.”

The other problem plaguing Rodriguez in terms of a title shot would be timing because she doesn’t want to sit on the sidelines just waiting for something to happen.

While Namajunas and Zhang are set for a rematch at UFC 268 on Nov. 6, the winner wouldn’t likely compete again until sometime deep in 2022.

If Esparza ends up drawing the winner, then the next title contender would be looking at an even longer layoff and that much time lost is something Rodriguez isn’t willing to sacrifice.

“We know once someone defends the title it’s going to be at least six months before they fight again,” Rodriguez explained. “So that puts me in a tough spot because if I’m going to wait for it too, we’re talking about a year [long layoff].

“There’s a bunch of girls ahead of me. If I’m not next in line, I’d have to fight someone else and there’s a lot of interesting fights ahead.”

Source- Marina Rodriguez blasts Joanna Jedrzejczyk for her inactivity, stumps for Carla Esparza to get next title shot – MMA Fighting