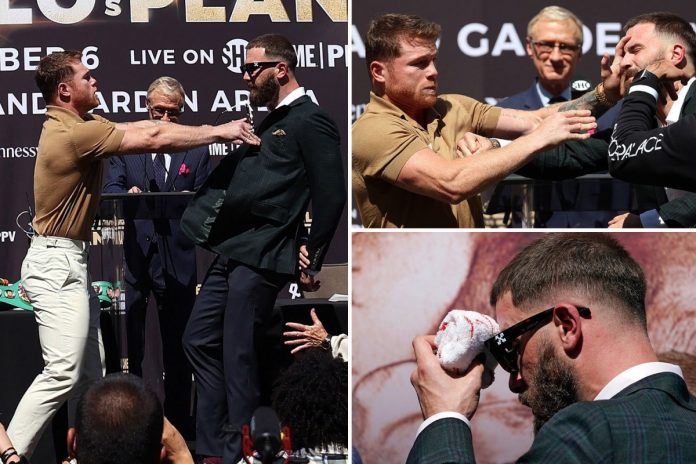 CANELO ALVAREZ left Caleb Plant with a bloody gash under his eye as the pair sensationally brawled at a press conference.

On Monday the pair announced they had agreed a deal to fight in Las Vegas at the beginning of November to unify the super-middleweight division.

But the first event to publicise the massive fight descended into chaos on Tuesday in Beverly Hills.

After the pair squared up and exchanged words, Canelo suddenly pushed Plant backwards.

The 29-year-old American then threw a punch at his Mexican rival in retaliation.

But pound-for-pound king Canelo, 31, showed lightning-quick reactions to dodge the incoming hook and then lit up Plant with a stunning counter-punch that left him with a nasty cut under his right eye.

The left hand from Canelo shows just what is in store for the 21-0 Plant, who was left bloodied by the shot.

The Tenessee fighter suffered a gash under his right eye which has the potential to postpone the fight, according to ESPN reporter Mike Coppinger.

Naturally, fans are already going wild on social media in reaction to the brawl.

One fan commenting on Plant said: “Serves him right for trying to hit Canelo with a cheap shot. Elite head movement and counter from Canelo too.”

Another added: “Who threw the first punch? Once you do that you can’t really complain, nevertheless absolutely insane scenes I hope the fight still goes on.”

However, during a fiery press conference – in which Alvarez again became enraged after Plant brought up his past drug use – the American said he wasn’t cut from a punch, but rather his sunglasses.

He said: “It’s just a small cut. It’s from my sunglasses. I had sunglasses on. So when whatever happened, happened, it just scratched my cheek.”

Plant is not the first to test Canelo’s patience during a press conference.

Canelo belittled Andrade for becoming a champion without defeating any big names, before telling the American to “Get the f*** out of here”.