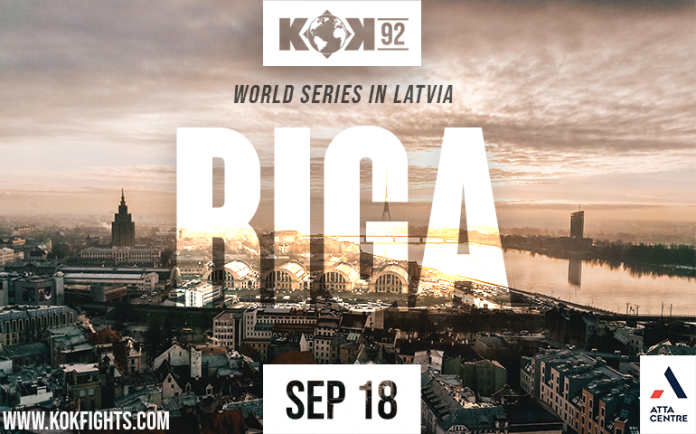 FightBox is proud to announce that King of Kings, one of the most recognizable brands in kickboxing, will return to live action from Riga, Latvia on Saturday September 18th 2021 starting at 6:00 pm CEST (7:00 pm in Latvia).

After a short summer break, King of Kings is back on FightBox HD from the Latvian capital of Riga, which has always been a hot spot for KOK. However, because of tight COVID regulations in Latvia, this will be the first KOK event there since November of 2019.

One highly anticipated bout features the KOK return of former Middleweight WGP winner Chico Kwasi of the world-renowned Mike’s Gym as he takes on Volodymyr Hynzhu. Hynzhu scored a big 3rd round stoppage victory in his last KOK appearance in May of this year in Poland, but now faces the biggest challenge of his career against a top level fighter like Kwasi who is currently ranked #1 in the KOK Welterweight division.

Also on the card is the first ever Dream Boxing Baltic Middleweight Title Fight. Latvians love their boxing and Dream Boxing, the boxing branch of King of Kings, is stepping up with this huge fight featuring Estonia’s Eduard Belas challenging local hero Ivans Levickis. The full fight card for the evening can be found below.

King of Kings provides events of the very highest level by bringing together world class athletes and the most dedicated fans of combat sports to the largest arenas in the world. KOK has a wide fan base due to its nature, its intensity and spontaneity and FightBox is the broadcasting associate for these series of events.

In addition to the live worldwide broadcast on the FightBox TV channel in over 60 countries, the King of Kings coverage will also be available on-line to FilmBox subscribers at www.filmbox.com. Card is subject to change.