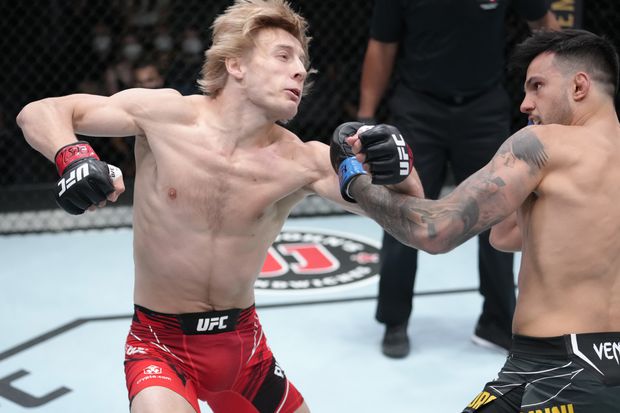 Pimblett opened the bout with an athletic kicking game, landing well while Vendramini swung back with counters. The two traded calf kicks, and Pimblett scored with a hard left. Vendramini then cracked his foe with a left hook, switched to the double leg, and threw his foe to the mat. From top position, Vendramini landed a few elbows before Pimblett escaped to his feet. Hard low kick from Vendramini, but Pimblett did answer with with a couple punches. Pimblett’s kicks began to flow again, but Vendramini landed heavy with another left. The Brazilian was bullying his foe a bit. Pimblett’s high chin was getting him caught by looping shots, and his takedown was denied along the fence.

All of a sudden, Pimblett went wild with a combination, and his right hand stunned Vendramini! “The Italian Stallion” backed into the fence and Pimblett flurried wildly, landing a huge series of shots that sent his opponent crumbling to the canvas.

It wasn’t easy, but Pimblett lived up to his pre-fight promises.

Conor McGregor reveals the only fighter to...