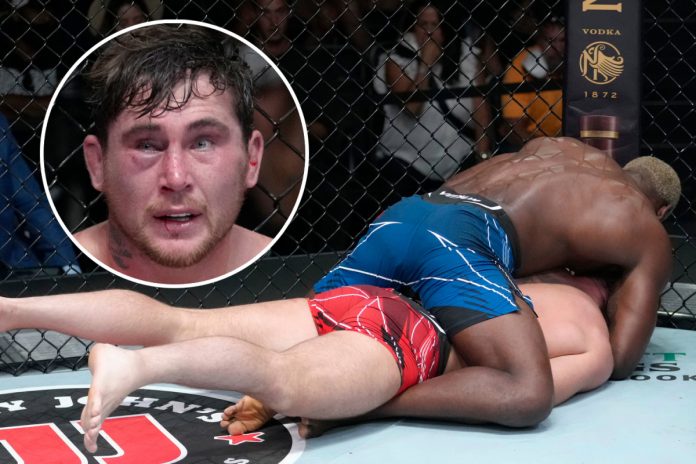 DARREN TILL’s hopes of fighting for the UFC middleweight title next year have been shattered by the in-form Derek Brunson.

The Gorilla was tamed by the American on Saturday night in the main event of UFC Vegas 36, where he suffered a third-round submission defeat.

Till, 28, had hoped to jump ahead of former opponent Robert Whittaker in the pecking order with a statement-making victory over nine-year UFC vet Brunson.

But the pride of Liverpool’s bid to fight for another world title ended up being derailed courtesy of a rear-naked choke.

Immediately after having his hand raised, the in-form Brunson – who has won his last five in a row – called for a rematch with 185lb champ Israel Adesanya.

He said: “Israel Adesanya, boy, I ain’t been working all this time for nothing boy. You next, boy. You next!”

Team Kaobon standout Till started well, immediately taking the centre of the octagon and gauging the range for his piston left hand.

He found the mark early doors and successfully fended off Brunson’s attempts to ground the fight.

Brunson struggled with the speed of the Scouser’s straight left and eventually shot for a double-leg takedown, which he landed and used to jump into half-guard.

After a quick transition, the 37-year-old quickly postered up and landed big punches on the grounded Gorrila, who was left with a massive shiner on his right eye.

Till eventually worked his way back to his feet with a minute of the stanza remaining after Brunson gave him some space.

Muay Thai specialist Till looked to establish his jab early in the second but quickly found himself fending off another yet takedown attempt.

But the former welterweight title challenger showed great defence as he negated the attempted step-around sweep.

Brunson, however, eventually brought the fight back down to his domain with a beautiful double-leg takedown against the fence and once again went back to work in half-guard.

Till, to his credit, did a better job of avoiding Brunson’s ground-and-pound by tieing him up before forcing his way back to his feet with ten seconds of the round remaining.

A big straight left landed for Till early in the third and forced Brunson to shoot for another takedown.

As he did early in the second, Till stuffed the attempt and responded with a nasty knee and elbow inside the clinch.

And moments later, he put Brunson in a world of trouble with another nasty straight left – although he was quickly taken down after recklessly going in for the kill.

As he tried to buck Brunson off him, Till inadvertently put the Sanford MMA ace into full mount.

A fatigued Till tried to twist his way out of the position but ended up giving his back and his neck, which Brunson didn’t waste any time in taking.

Defeat to Brunson was Till’s second at middleweight and fourth in his last five outings.

It wasn’t all doom and gloom for the Brits on deck at the UFC’s Apex facility as Tom Aspinall, Molly McCann, Jack Shore and debut boy Paddy Pibmblett all recorded victories in Sin City.

Heavyweight prospect Aspinall – a team-mate of Till’s – made light work of Sergei Spivak, TKO’ing the Moldovan in the first round to stretch his octagon record to 4-0.

Fan favourite, meanwhile, McCann saved her UFC career with a unanimous decision victory over Ji Yeon Kim in the final prelim of the night.

Meatball survived adversity in the first round after being dropped by an accidental clash of heads but stormed back in the second and third – the latter of which she ended by roaring in the face of the South Korean and urging her to hit her in the face.

Welsh bantamweight Shore stretched his UFC run to 4-0 with a dominant display against Armenian Liudvik Sholinian, which he hopes will secure him a clash with one of the 135lb division’s elite.

The Scouser, who twice turned down the UFC, made his long-awaited octagon bow against Italy’s Luigi Vendramini.

The Baddy looked on course to make the worst possible start to his UFC career as he was rocked early in the first.

But he came roaring back moments later to produce highlight-reel stoppage and send UK MMA fans across the globe into raptures.

Derek Brunson vs Darren Till – Brunson def. Till via submission (rear-naked choke) – Round 3

Source- Darren Till choked out by Derek Brunson at UFC Vegas 36 as Paddy Pimblett and Molly McCann shine at Apex (thesun.co.uk)